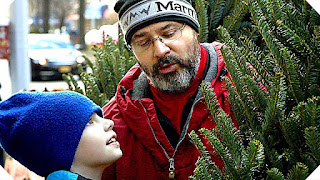 Tree Man is a documentary about one of the merchants who travel into New York City every year to run a Christmas tree stand. The movie is difficult to review because it's more an exploration of character and place than a story. It would work well as a companion piece to I am Santa Claus or Becoming Santa - this aims to do for tree salesmen what that did for Santas.

To its credit, it mostly succeeds. The central character, Francois, is intriguing, as is the expanded cast of seasonal help and rival sellers. There's a seemingly endless line of loyal customers ready to tell the camera why they keep returning to buy from Francois - he's energetic, enthusiastic, and friendly in public. In private, the movie gives a glimpse of the toll this lifestyle's taking. He's been at this for years, which means he's missed those holidays with his family.

A large portion of the movie focuses on New York itself, and it does a better job than most films in capturing some of the complexities of the city. The sense of community is significant, as are the limitations to that. A pair of helpers working with Francois are teenage boys who get to glimpse into the lives of the rich customers.

The movie also offers some great character studies of some of the other tree men and women who come from all over. I'd have liked more time with some of them, actually - you feel like each has a complex story you're just getting the edges of.

But while the movie does a wonderful job exploring the people and place, it's frustratingly vague when it comes to more concrete aspects. We spend a great deal of time building tone and getting a feel for what this month of Francois's life is like, but we're never provided with economics, legalities, or operational considerations. After more than an hour, I don't even know how much Francois charges for his trees, let alone what he pays his distributor.

I assume he needs a licence to sell in New York, but this isn't mentioned, either. And how does he get the electricity he uses to light his stand?

I realize these questions aren't as emotionally engaging as a character study, but they could have offered some context. I spent a lot of the movie wondering what Francois did during the other eleven months of the year. How much time does he devote to preparing for his holiday business? We aren't told much outside of the window we're shown.

Despite this, Tree Man is enjoyable and fascinating. As someone who spent seven years in New York, it was worth watching just to take another look at the city and all its contradictions. I wish they'd have offered some concrete numbers, but overall this provided an interesting look into an often overlooked holiday profession.
2016 Documentary Erin Snyder Movie