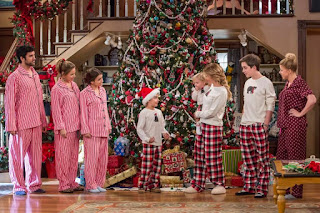 It took eight years for civilization to kill off the original Full House, but some monsters just won't stay dead. In a twisted perversion of nostalgia, the concept and characters were resurrected, along with the stale jokes. If you're looking to place blame (and you really should be), Netflix is responsible for this abomination.

The series seems to center around DJ Tanner, her sister Stephanie, and their friend, Kimmy, from the original show. Joining them are a pack of kids, love interests, and pet animals you won't care about. Supposedly, the three leads from the original (Joey, Jesse, and Danny) show up from time to time, but all were mercifully missing from the holiday installment.

By my count, there were three main stories going on. First, DJ's middle child finds love on a play date with the daughter of one of DJ's ex-boyfriends from when she was young. The kids are around six or seven - I think this was supposed to be cute, judging by the canned cooing sounds. Anyway, DJ's son finds an old necklace and gives it to the girl as a Christmas gift, unaware it's one her father gave to DJ years earlier. This of course descends into stupidity.

Next up is Stephanie's relationship with a guy who looks like a stoner. He tells her he loves her at the beginning of the episode, which triggers her fear of commitment. Towards the end, DJ sits her down and talks to her about this, successfully diagnosing her problems as having stemmed from the loss of their mother. Hearing this is everything Stephanie needs to access her feelings and reorder her priorities.

Lastly, Kimmy's daughter is supposed to play the Rat King in the Nutcracker, but this means skipping her best friend's Christmas party. Kimmy suggests she goes to the party for an hour then race to the performance, but of course, she's late. Kimmy goes on in her place, then the daughter is put on as the Nutcracker Prince after Kimmy disables the original actor by kicking him in the balls.

Everything kind of wraps up at Christmas in a barrage of unfunny jokes, hollow emotional beats, and idiotic platitudes.

If any of that made the least amount of logical sense, I've failed to accurately synopsize this incoherent mess. Fuller House is clearly an inane, pointless excuse for entertainment; the sort of family-friendly TV made exclusively for the youngest viewer by people who severely underestimate the intelligence of even that age bracket. There wasn't a single joke I laughed at - not one. And all through it, the show's laugh track just kept kicking in, desperately trying to convince me something was humorous.

In short, this episode was an abysmal waste of time and effort.

So... I guess they succeeded in recreating the core of the original series.
2016 Comedy Crime Against Humanity Erin Snyder