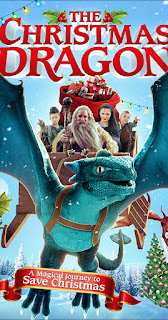 If you've been reading this site for any length of time, you probably know that interesting Christmas genre mashups are highly sought after around here. Christmas horror is so common as to be unsurprising now, but Christmas science fiction is rare. Christmas crossed with epic fantasy is extremely rare.

It turns out there are some reasons for that.

We start our tale on Christmas. Or Christmas Eve. Or something. Ayden receives a kite in a dirty sock, and her parents tell her to thank Father Christmas. Cut to Ayden flying the kite outside on a sunny, warm day. It's unclear how much time as passed.

Some villains in black - backed up by a bunch of mooks decked out in cheap gear and swords that your average ren faire attendee wouldn't be caught dead with - accost Ayden's parents for some tax money. (Spoiler: the idea that there is a king or other person in charge of this place is never mentioned again.) Her dad accuses them of skimming off the top, and a fight ensues. The villains decide to just arrest everyone and sell Ayden, or something, so she runs across the meadow and trips right into another set.

Here there are some suspicious rocks in a hole. The soldiers only have time to say: great, dragon eggs are worth more than kids, before a dragon promptly appears to fry all the mooks and Ayden's parents. Time for a time jump!

Teenage Ayden lives in a church that doubles as an orphanage with the rest of our cast: Fin, a young boy you know is a punk because he wears eyeliner, a pair of troublemaking twins (a boy and a tomboy) whose names I never did catch, and two older teens, Garrett and Rosalynne, who mostly seem into each other.

After we establish the setting and that Ayden has dragon-detecting scars (do dragons cause a drop in barometric pressure or something?), she suddenly remembers that it's "almost" Christmas and they should all wish for something. The other orphans are skeptical, and none of them even have heard of this before.

Here we're finding the first problem with the way Christmas is integrated (or really, not integrated) into this genero-wannabe-Willow world. Christmas isn't part of the culture. It went away, and no one noticed. They don't have Christianity, although they have nuns and monks. More important, no one says the words winter, solstice, year-end, etc.

Anyway, Ayden convinces the kids to help build a wreath for Christmas, and out in the woods she runs smack into an elf. Now, we do have to give this thing props for being the only complete attempt we know of to fuse a Christmas elf with a Tolkien elf. The elf even has okay prosthetics.

The elf gives Ayden a magic rock and tells her she has to save Christmas by finding the magic, which is lost. Vague enough?

She manages to convince the rest of the kids (except Rosalynne) that this is a good idea, even though none of them have ever had Christmas, so the idea of "saving" it should have no meaning. They sneak out the next morning, although Garrett stays behind to throw off pursuit.

We'll always remember your sacrifice, guy who's had like three lines so far and no personality beyond "affable!"

Ayden and the young kids follow the hot-cold signals of the glowing rock through the woods, where they run into Rosalynne. What she won't tell them until a few scenes later but you know if you've been paying attention is that the villains from the beginning have been selling teens from the orphanage into slavery, they took Garrett, and she narrowly escaped.

I'm going to skip over a semi-decent river monster puppet and the very silly acting of the kids around it to get to our next character. The young heroes have reached the first tavern since leaving the boundaries of the only town they've known. WHO DO YOU THINK THEY MEET? Ayden's rock leads her to rescue this scruffy-looking guy from a random cage, and they all end up running from the aforementioned villains, still looking for children to sell.

At this point I need to mention that the composer on this movie contributed a lot to why it sucks. The action might not sound that bad, but as soon as Captain Jack Martigan, son of Arathorn, gets out and starts fighting off some mooks, the music goes ultra cheesy heroic, just so there's no chance you'll miss that he's a good guy and those are the bad guys.

After a chase scene which makes little sense, Captain Martigan introduces himself as Eric. (The credits claim the spelling Arik, but that's just silly. The actor clearly said Eric, so Eric he shall be.)

Eric knows why Christmas is in trouble: he lost a magic orb in a bet with an ogre. After some cinematography flagrantly cribbed from the Fellowship trailer, he and Ayden steal it back from a guy who crawled out of WETA's reject pile. (That is to say, the costume looks okay in the long shots, not so much close up.)

Eric and the kids start toward "the North" to return the magic orb, but they're sidetracked by a bunch of bandits who've shot down a young dragon. The younger kids convince Ayden to help (she has medical knowledge in a blink-and-you'll-miss-it moment near the beginning) while they distract the bandits. This Home-Alone-in-the-woods only goes so far, though, and Ayden is cornered, only to be rescued by a woman! who reveals her face! Slowly! And spins! Despite a giant hood that blocks her face completely for a lot of it, she executes competent high school fight choreography to drive off the bandits.

It turns out she's an elf, and she's got a bone to pick with Eric for stealing the dang orb in the first place. Of course, he's also Father Christmas' son, so I'm not sure how strong the case for "stealing" really is.

They say farewell to their new dragon friend and head into a creepy forest that stands between them and Father Christmas. There are a bunch of goblins to fight off, and... this is getting long. The dragon rescues them. They make it to the building and Father Christmas looks a lot like Wyrmtongue just stepped out for a minute. Eric apologizes and puts the orb in the staff, but nothing happens. Ayden has been claiming all along that children making a wish and having it come true is the magic of Christmas, and it's periodically been making the rocks flash. So she figures if they fulfill all the wishes in town, they could jump-start the orb.

This leads to a bunch of kids against a green screen pretending to ride in a flying sleigh pulled by a baby dragon. It's hysterical.

A lot of overly complicated showdowns happen in the town, but the best/worst part is Ayden squaring off against an angry mob who want to hurt her dragon. Suddenly Christmas is for forgiveness, instead of presents. Okay. The give-gifts-to-all-the-kids plan works and Father Christmas shows up in town in time to save Ayden from getting her eyeball crossbowed by the villains from the beginning and agrees to take in all the orphans.

Then Eric and the elf lady get married, and all the other elves must have died or been eternally lost to the dark magic because none of them came to the wedding. The end.

I don't know that I can possibly get across how bizarre this was, how silly and hackneyed the plot, acting, writing, and direction are. It's about on par with a medium-to-bad SyFy Original TV Movie. For us, it was especially strange how awkwardly the Christmas elements were mashed up with the Fantasy tropes.

This insane B-movie experience is currently available on Hulu.
2014 Fantasy Lindsay So Bad It's Good