By Lindsay - December 14, 2017
Sometimes the best way to start a review is with words of wisdom from my Mainlining Christmas partner. Erin’s take: “These are all good comic actors wasting their time. These scripts really wish the show was Seinfeld.”

Will and Grace was notable at the time as one of many forces that helped some people understand that gay people are just like everyone else. Now anyone can be featured in mediocre, dated sitcoms, but it was (sadly) a big deal then. 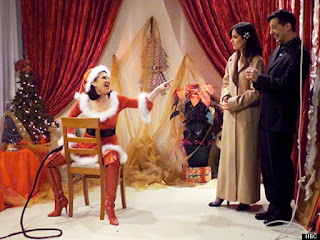 The first Christmas episode is in season four. Grace has found out that Will is dating a mysterious man named Robert, but he refuses to arrange for them to meet, claiming that it’s too early in the relationship.

Sometime later, when Will picks up Robert for lunch, he finds out that Grace has invited him for dinner. He’s concerned, but decides it’s no big deal. When Robert comes, though, Will is incredibly self-conscious. Robert is a dancer, and he's demonstrative, flashy, and sensitive/artsy as can be.

Robert and Grace get along, he laughs at her jokes, she likes him. After he leaves, Will flips out, accusing Grace of making fun of him. She accurately accuses him of projecting. Later, the two men are walking down the street and Robert gets overexcited about snow. Will decides that the relationship isn’t going to work out.

In the other plot, Jack is working at Barney’s department store, and a designer for one of the fancy Christmas window displays has dropped out. Instead of recommending Grace for the job (she’s standing right there), Jack jumps at the chance.

Unfortunately, his first attempt features Karen in a “sexy Santa” costume and a sort of BDSM-themed proposal. His boss not only hates it, she threatens to fire him from his normal job if he can’t get a better version done by the next day.

Karen comes by the apartment building where they all live to try to bribe Grace into fixing the window. She refuses, but then overhears Jack praying to Santa for help. She makes his window gorgeous, and Jack’s boss loves it, but Jack doesn’t realize that she did it for him.

This episode was more boring than anything else. I don’t remember why this was considered funny. 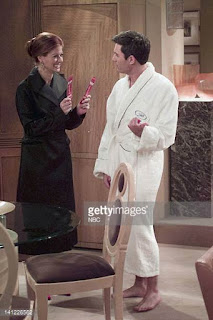 In season five, Grace gets married, and this episode is partially Will dealing with that adjustment. He doesn’t have plans for Christmas Eve, so he agrees to hang out with Jack and Karen for drunken revelry at the Plaza Hotel.

That is, until Grace shows up. She was going to The Nutcracker with her husband Leo, but he got paged (he’s a doctor) and she offers his ticket to Will. That is, until Leo shows back up again. This entire sequence is then repeated, proving only that Grace doesn’t care about anyone’s plans or feelings as long as she doesn’t have to go to the ballet by herself. Leo and Will, after both deciding they don’t want to sit through the ballet after all, make Grace sit with a sketchy friend who has been harassing her earlier. Nice guys.

This episode came closer to being funny at times, but it also begged so many questions. Why does Grace even care about the tradition of the Nutcracker if she’s Jewish? Why did Will want to go so badly and then decide that the Nutcracker is creepy as an adult? Most cities have the Nutcracker EVERY year - why would he have waited until now?

Why did the writers keep repeating the same joke structure over and over? Why did anyone think the recurring joke about Karen accosting hotel staff by calling them up to the room on a pretext and then aggressively "caroling" at them was funny?

Some things must remain a mystery.
00's Comedy Episode Lindsay