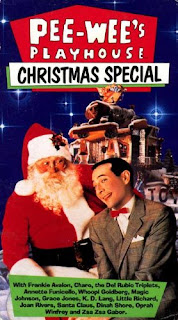 Despite having been the right age, I grew up disliking Pee-wee's Playhouse. I found the characters and sets off-putting as a kid, and I wasn't old enough to appreciate that was part of the point. The 1988 Christmas Special seemed like a good chance to revisit the show and give it another chance.

Ultimately, I was left torn on this one. I have far more respect for the manic, surreal premise, and Paul Reuben's portrayal is certainly impressively bizarre. However, I couldn't shake the feeling that there was something missing tonally. I wanted to be pulled into that odd, unsettling world, but I could never shake the sense I was watching people and puppets act weird on TV.

The plot of this special is... well... it doesn't really have much of one. This is basically an hour of Pee-wee interacting with a long line of guest stars and cast members before the holiday. The closest it comes to a story is a bit about Pee-wee's Christmas list being so long, Santa would need to skip every other house on Earth to fill it. This culminates with Santa showing up and asking Pee-wee to choose. Ultimately, he makes the right (i.e., boring) choice and is rewarded by being made Claus's helper for the night.

Beyond that, there are several recurring jokes. One bit concerns guests Frankie Avalon and Annette Funicello, who Pee-wee forces to work on a thousand Christmas cards without food, water, or breaks (this, unlike the gift dilemma, isn't resolved with any kind of moralizing). Likewise, there's an ongoing gag where everyone who visits the Playhouse brings Pee-wee a fruitcake.

The special features a long list of guests, including Oprah, Magic Johnson, Cher, and quite a few other big names. Mostly, these figures appear in brief segments, many of which were recorded elsewhere. Still, getting that many stars to agree to cameos is an impressive feat.

On top of all that, there are also several short stop-motion bits. I found these segments the most fascinating of the show's - they were well animated and integrated in interesting ways.

This was certainly a whimsical and surprisingly dark spin on kids programming - the designs looked as though they were halfway between dreams and nightmares. But like I said at the start, I never felt like the world being presented was believable, even in an otherworldly sense.

That said, it's certainly a neat special. If you grew up with Pee-wee's Playhouse, you'll probably get more out of this than I did - the jokes held up well enough, and it's certainly not boring. But I didn't quite connect with it.
80's Comedy Erin Snyder Fantasy Special