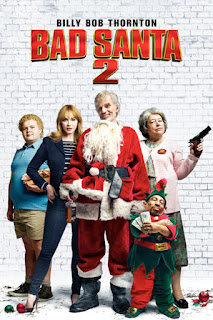 If either Bad Santa or its sequel were 1% lower on Rotten Tomatoes, their sum total would be exactly 100%. It's a shame this isn't the case, as there'd be a certain poetry to having this occupy the space its predecessor does not; a symbolic representation of how it is the empty husk of what it tries to copy.

Ultimately, the one positive thing I can say about this pointless exercise is that it serves to emphasize how surprising it remains that the original was any different.

The plot of Bad Santa 2 follows a fairly routine heist formula. The same could almost be said about part one, except there the heist mainly served as a backdrop for a story of a nearly irredeemable man discovering the importance of a found family. Here, the focus is inverted - there's some lip service paid to the same theme, but the movie's attention is planted firmly on the crime. When the movie does drift off-topic, it's to exploit moments of depravity and gross-out jokes in an attempt to shock the viewer. Part one, of course, was no stranger to shock humor, but that movie managed to weave it into the story. Also, unlike the sequel, Bad Santa was actually funny.

That, incidentally, is this movie's most unforgivable sin. When it's not boring, it's downright unpleasant (and vice-versa). The handful of jokes that actually land are so few and far between, you're likely to be too surprised to laugh.

The movie brings back Willie, Marcus, and Thurman from the first, but omits everyone else. The movie adds Willie's mother, played by Kathy Bates, in an attempt to mix things up. She sets up the job and reunites Willie and Marcus, now that the former has hit rock bottom and the latter is out of jail. Dozens of jokes revolve around just how horrible of a mother she was - and, yes, you will get very tired of these.

Meanwhile, Thurman, whose relationship with Willie formed the backbone of part one, feels tacked on. He's virtually nonexistent in the first half, then appears at the end to remind Willie that... something, something, found family.

Of course, the movie contrives an excuse to put Willie and Marcus back into the Santa and elf suits. This time, Willie works as a sidewalk Santa for a Salvation Army stand-in. This is barely relevant, though - he spends only a few scenes in this capacity, even when the movie has him wearing the costume at other times.

Noticeably absent is Lauren Graham's Sue. The movie offers a brief synopsis of why they're no longer together, which probably wasn't even necessary. They sort of replace her with Christina Hendricks (twenty years younger than Thornton, incidentally), but this character isn't as relevant. She never forges any kind of emotional attachment to Willie, and - frankly - lacks any kind of believable personality or depth. She's written as less a character than a sex object - I'm not sure I've ever seen a better illustration of the sexy lamp text.

This is essentially true of all the movie's female characters, with the exception of Bates's Sunny. And, funny enough, I just learned from Wikipedia that character was originally intended to be Willie's father, then was gender-flipped at the last minute. Why am I not surprised?

To be fair, switching the character from Willie's father to mother was probably a wise move. Not as wise as, say, hiring someone competent to rewrite the script from scratch, but slightly better than nothing.

The movie's marks are even more pitifully written. Bad Santa 2 attempts to build an antagonist in the manager of the charity they're robbing but fails miserably. They make a halfhearted attempt to handwave the moral implications of stealing from the needy by establishing that the charity itself is corrupt, but this never factors into the story or goes anywhere.

The original managed to craft a story out of offensive characters and situations that, somehow, didn't end up feeling offensive. This just hurls racial and sexist slurs at the audience and seems to expect us to laugh. The subtlety is gone, and the sense of desperation feels entirely forced. The actors - especially Thornton and Bates - do their best to sell some shred of meaning, but there's no salvaging this script.
2016 Comedy Crime Crime Against Humanity Dark Comedy Erin Snyder Movie