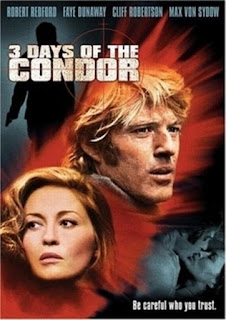 Three Days of the Condor is one of those movies most of us have heard of but never seen, despite movie critics and historians swearing it's extremely important. The premise of Captain America: The Winter Soldier was largely drawn from this: it's a tense espionage tale about a CIA agent trying to stay alive when he uncovers a conspiracy within the Agency itself.

Robert Redford plays the lead, Joseph Turner, who's responsible for reading and analyzing books. He's smart, but no spy or assassin. Max von Sydow, on the other hand, is a cold-blooded killer working for parties unknown. While Turner's out picking up lunch, Sydow shows up with a group of mercenaries and kills off the rest of the branch. Turner returns to find he's the only survivor. He pulls a handgun out of the receptionist's desk and runs.

He calls into the head office, but the agent sent to bring him in tries to kill him. Turner then abducts a woman off the street at gunpoint, ties her up, and forces her to help him. He has a brief run-in with Sydow but escapes alive. Then...

Okay. Let's talk about the reason I'm not slapping a "highly recommended" label on this otherwise fantastic classic spy movie.

He rapes the woman helping him. The scene isn't played as a rape scene, of course: it's shot as a love scene and treated as such by the narrative. But... he's holding her hostage, she doesn't believe his explanation why, and he promises to leave the next morning if she sleeps with him.

Cue... romantic music? The movie tries to sell it as consensual by tossing in some pop-psychological analysis from Turner, but that's bull. It's a rape scene repackaged as a love scene, told entirely from Turner's perspective. The 70's were a different time, but they weren't that different.

The decision is all the stranger since they could easily have avoided it. Even if they felt a love scene was essential, they were just a scene away from having the woman learn everything Turner had told her was true - the next morning involves a solid fight scene when an assassin tracks them down. If they'd had that happen first and have him offer to leave, the romance could have been played as consensual. It's baffling they didn't do this instead.

The rest of the movie is great. She falls for him (of course), and helps him travel to DC, where he uses knowledge obtained through a lifetime of reading to track down the ones responsible and relay their identities to the head of his division.

The final showdown with Sydow's character comes as a shock. The superior assassin gets the drop on Turner when he's confronting the movie's shadowy mastermind. Only Sydow's not there for Turner: he's back on the CIA's payroll. He takes out the villain, then offers Turner a ride. He gives him advice on how to stay alive and even tries to sell him on the merits of operating as a freelance international assassin.

That, coupled with a shot of his character holding a figurine of a knight, make for an interesting callback to The Seventh Seal. It's as though Sydow has been promoted from knight to death, which is as good a description of his character as any. He's not really evil or even cruel - he's just a force of nature existing in a world where governments operate without morality or compassion.

Turner declines the suggestion of becoming a hired killer but accepts the ride. He meets with the head of his division one final time but refuses to return. The movie ends with the reveal he's told his entire story to the press, leaving the fate of himself, the CIA, and perhaps the world in their hands. The end of Watchmen is reminiscent of this moment, as is the finale of Winter Soldier, which also borrows heavily from the shadow spy organization within an organization motif.

If you're wondering where Christmas fits in all this, it's in the background. The movie is set during the holiday season, as evidenced by music played in stores, decorations in homes, and a few other details. There's no indication any of this was in the script - characters don't wish each other Merry Christmas or acknowledge the juxtaposition - so I'm assuming this was a directorial choice made for tonal reasons.

Overall, this is a very strong, well-crafted movie. If it weren't for that one odd choice, it would be virtually flawless (or at least as close as movies in this genre come). But while I don't believe incorporating rape into a movie is in itself a bad decision, doing so in a way that excuses the act isn't acceptable. Almost everything else in the movie ages well, but this one scene makes it difficult to recommend without a major caveat.
Action Erin Snyder Movie Spy