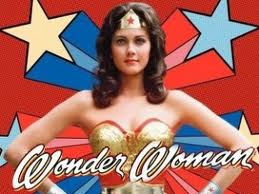 I had never seen a full episode of this series, but I think I'm going to have to watch more after seeing this one. The cheese factor is right on the level that I really enjoy: the occasional wink and nudge in good fun, charming, affable characters, somewhat silly fight sequences and dated but well-meaning special effects.

This episode isn't that impressive itself, though. Diana (in her civilian life as agent Diana Prince) is assigned to protect a trio of scientists. They each have knowledge of a piece of some doomsday weapon, and one of them has been kidnapped and... replaced with a lifelike android. If someone were to get all three scientists, then clearly, disaster! So Diana investigates, both in and out of costume, and eventually figures out the plot and rescues the scientists. No surprise there.

In the process there are more androids (who seem to melt down, literally, at the slightest challenge) and their toy-maker creator, played by Frank Gorshin, better known as the Riddler to Adam West's Batman. As toy-themed villains go, this one's actually pretty tame. And of course Wonder Woman has to fight a Wonder Woman android. I was very amused by the villains using their WW android to "trick" Diana Prince into coming to their lair. Her look of bemusement at the turn of events was great.

On the other hand, a lot of the plot points made little sense, and the ending was very odd; Diana's actions toward the villains become downright creepy if you give it more than a moment's thought.

Maybe this isn't a first choice as a Christmas episode, but it might match well, as far as tone goes, as a double feature with the Xena holiday episode, or with Lois and Clark. I do think I need to watch more of this show, though. After Christmas.
70's Action Episode Lindsay Superhero