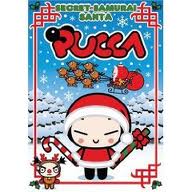 I came across this searching through Amazon's instant view options (having pretty much exhausted Netflix last Christmas), and selected it out of sheer curiosity. I feel like I've seen this referenced before, but had absolutely no clue what it was when I watched it. Honestly, I don't think I even bothered reading the description first.

After, I hopped over to Wikipedia to grab some context. Apparantly, this was a web series about a village of ninja. The animation's highly stylized; I guess the characters are supposed to be cute.

While I didn't really find them all that adorable, I really enjoyed the comedy, especially in the first of the three episodes.

I should mention the episodes are extremely short - about eight minutes each - meaning three together come out to about the equivalent of a half hour show (minus comercials, of course).

The first, "Tis The Season For Revenge", is by far the best, re-imaging Santa as a repentant ninja. His ex-partner has returned for revenge, and the subsequent fight is nothing short of awesome.

"Northern Lights Out" is next. Here, the Northern Lights have gone out, leading to an attack by an abominable snow monster. This has its moments, but it's probably the weakest of the three.

Finally, "Secret Santa" has an imposter kidnap Claus to reap vengeance upon his enemies. It's good, but again falls short of part one.

I thought these were pretty good overall, but I'd suggest starting with "Tis the Season for Revenge" then deciding whether you need to see more. I really enjoyed that one, but the others felt a little like overkill.
00's Action Comedy Episode Erin Snyder Short