Lois and Clark: The New Adventures of Superman, Season 4 - The Night Before Mxymas (1996) 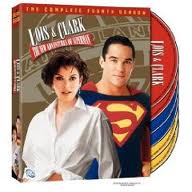 Like most, my memories of Lois and Clark are hazy at best. The only other episode I've seen in recent years - another Christmas episode, coincidentally - was pretty awful, and I have it on pretty good authority the series was more bad than good.

That said, when a friend mentioned there was a Christmas episode featuring Mr. Mxyzptlk, my interest was piqued. When I heard it was written by Tim Minear of Firefly fame, I was sold. Lindsay and I headed over to the WB site, found the episode, and settled in to watch.

Overall, the episode was pretty good, despite some painful - and I do mean painful - sappy speeches at the end. Mr. Mxyzptlk fits in with the holiday theme, though his elvish aspects never really came up. Mxyzptlk was actually a bit darker than he usually is in the comics. Not content with creating mischief, he's out for world domination.

Because his methods still focus more on tricks than outright destruction, enough of the character comes through to appease this comics fan, at least.

The problem, as I see it, with Lois and Clark was that it reduced Superman to a sitcom. However, Mr. Mxyzptlk fits in a sitcom environment, anyway, so this particular episode worked for me. It didn't fill me with holiday cheer - and it wasn't even in the same ballpark as the brilliant portrayal Mxyzptlk got in Superman: The Animated Series - but it was definitely worth watching.

You can see this episode on the WB streaming site. (Beware, their player didn't play well with all browsers.)
90's Episode Erin Snyder Superhero