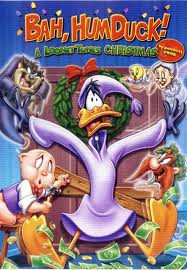 Bah, Humduck attempts to invoke the joy of classic Looney Tunes cartoons in telling a quirky version of A Christmas Carol, and it fails miserably on both counts. There's absolutely no charm, no fun, and no humor in watching this special drag out.

There's a sense that this was made to mimic better movies. The backgrounds are filled with a constant barrage of old characters from Warner's past, but the references are hollow, adding up to nothing. It's as though the producers are trying to convince the audience they love these characters, too, despite clearly not understanding what makes the classics entertaining.

The writing is dull and uninspired, driven by a need for instant recompense for any misdeed or heartless comment. The role of Scrooge is played, as the title suggests, by Daffy, who is impossibly rich for no discernible reason. If he threatens a child collecting for the poor, a door closes on him. If he dismisses Christmas, he falls down the stairs. Karmic payback is so consistent, you wonder why the spirits bother to show at all.

I don't recall laughing once throughout the entire hour-long run time of this thing. If you're perusing Netflix or Amazon and see this, peruse further. If you go to a Christmas party and see this on, leave. Then get new friends.
00's Comedy Erin Snyder Special Sucks