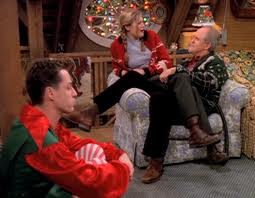 I remembering watching this show back when it started. I saw the first season, but gave up after a few episodes in the second, so I never got to this one.

Before I go on, I'd like to point out that seeing Joseph Gordon-Levitt when he was that young is really messing with me. To think that kid grew up to become Cobra Commander.

The episode is entertaining enough, and thanks to the series' concept, is actually about Christmas, not just set during the holidays.

Like pretty much every single episode of the series, this was a comedy of errors about the disguised aliens trying and ultimately failing to understand our strange world.

Ahem. That's why I got tired after a season back in the 90's. Fortunately, having not seen an episode since then, I was ready to jump back in.

You get subplots for each of the main characters, though Dick clearly had the most screen time. He was cast as the episode's Scrooge, though he was always kind of Scrooge, so that's not a huge shift.

The best sequence of the episode had him standing on his roof, hurling plastic decorations at screaming carolers below. The writing felt weak, but there's no denying this guy has comic timing.

The other plots were generally solid, with two of the aliens taking jobs at a mall and the third trying to find a gift for his girlfriend, despite lacking a basic comprehension of human etiquette.

I don't think anything in this episode qualified as exceptional, but it delivered more laughs than groans. I'm not sure you can ask much more from a sitcom.
90's Comedy Episode Erin Snyder Science Fiction