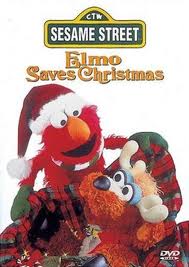 Like almost everyone who remembers Sesame Street before Elmo took over, I'm not really a fan of the red furball. I generally find him kind of cloying, and I wasn't really looking forward to an entire hour devoted to his adventures.

But this won me over quickly. While it's certainly not on par with Christmas Eve on Sesame Street or a Muppet Family Christmas, this absolutely carries on that tradition. This is everything Sesame Street should be: funny, endearing, and a tad subversive. Oh, I suppose it's got a lesson or something for the kids.

Right off the bat, the premise is explained in a loose frame story narrated by Maya Angelou (I don't think her presence really adds anything to the special, but then tossing guest stars in bit parts is common practice for these specials). Contrary to the title, the story is presented as the time "Elmo saved Christmas, then nearly lost it, again." And the special absolutely delivers on that promise.

Elmo is presented as an impish well-intentioned agent of destruction, which is a tad darker than I'd been expecting. The plot is fairly generic: after dislodging Santa Claus from his chimney, Elmo is rewarded with three wishes. He quickly wishes for Christmas to occur every day, to predictably disastrous results, which he gets to witness courtesy of a time-traveling reindeer (don't ask). The special's strength comes in the detail: there are numerous skits and side jokes that carry the story. I was impressed with how bad they let things get. No one dies or anything, but I imagine seeing Big Bird reduced to tears had to traumatize more than a few kids.

The real strength comes from the trademark wit and humor that permeate the special. This is genuinely funny, and most of the traditional Sesame Street characters get at least a moment or two.

Don't skip this just because you don't like Elmo. This is a solid addition to the line of Muppet-Christmas specials, and it deserves to be seen.
90's Edutainment Erin Snyder Fantasy Puppet Special