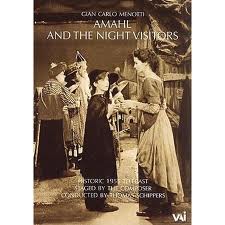 This was an interesting artifact to track down. Apparently, it was aired live in 1951, and then performed again in subsequent years to decent success, making it one of the first, if not the first, actual television Christmas specials to become a yearly tradition. This is the recording of the 1955 performance.

Watching it now is... odd. Erin flatly hated it, while I found it amusing.

Amahl and the Night Visitors is an opera about the Three Kings stopping to rest with a poor family on their way to find Jesus. Except that it's a light opera, so much of the kings' behavior is played for laughs. Amahl and his mother are destitute, but somehow have this building big enough to have a dance in, that has no furniture. I guess what I'm trying to convey is that any logic in the situation is somewhat lacking.

I honestly really liked one scene, though. The kings sing about the wonders of the child they are seeking, and Amahl's mother sings an angry counterpoint about how her son is beautiful and kind and special, but no one would bring him gifts of gold.

After some ridiculous dancing provided by neighboring shepherds, everyone sleeps except Mom, who contemplates taking some of the gold so they won't have to become beggars. After some sung rationalization, she tries it, only to be caught by the kings' lone servant. Amahl mounts an impassioned, if ineffectual, defense of his mother, and that's the last interesting thing that happens.

I mean, more happens: the kings offer them the gold in another song about how good Jesus is, Mom refuses, Amahl wants to give the baby a gift and then is miraculously healed (he was a completely unconvincing cripple up til this point) and he goes off with the kings, promising to be home soon.

Mom letting Amahl go off with a bunch of strange men who were just singing about wanting to touch him (because of the miracle, but still) is somewhat unintentionally funny. As is the fact that the star (comet) they are following looks sort of like a space squid or the Flying Spaghetti Monster.

Overall, not a great piece of cinema, but historically important, and interesting if for no other reason than to remember that once, major networks commisioned opera, and people liked it.

Ooh, I found a clip. This is Mom singing about how rich people dont appreciate what they have. (Most of the special is not this dramatic.)

Only recommended if you already like light opera.
50's Drama Lindsay Musical Special