A Colbert Christmas: The Greatest Gift of All (2008) 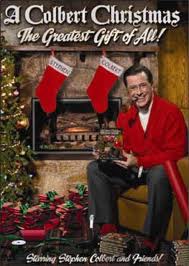 This had a fairly simple premise which seems like it should have worked better than it did. It's basically a parody of a traditional holiday special, featuring a string of guest stars and songs. You can feel Colbert's genuine love of the format shining through his cynical exterior, but that's a part of the problem here.

Part of me wonders if this would have worked better if it were hosted by the "real" Colbert instead of his TV personality. Don't get me wrong: I love The Colbert Report, but that character only makes sense in that world. Removed from politics, the character feels flimsy, and the jokes lose some of their edge.

It's still funny, of course, but it's nowhere near as strong as most episodes.

The music is all original, mostly parodies of Christmas songs. It's pretty good, but nothing that makes me want to track down the MP3's. There are some great jokes, as you'd expect, but it ultimately adds up to good, not great. This special might be a victim of its own expectations: we were expecting great.

It's still worth checking out, just don't expect too much.

If you're seeing it on DVD, you'll actually get a little more. There are some phenomenal extras, including 25 new short clips arranged in an advent calendar and more than 15 minutes of a Yule log/book burning. I don't think it's worth buying the DVD just for the extras, but they're definitely worth checking out if you're renting or ordering through Netflix (as we did).
00's Comedy Erin Snyder Special Variety