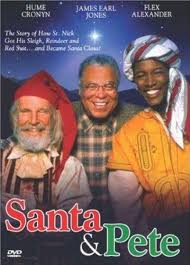 This is one of the myriad made-for-TV family movies that gets churned out every year. We try to keep a few of these in our queue to ensure we're experiencing the entire spectrum of holiday fare.

As the title suggests, this one focuses on the character of Black Peter, a slightly obscure holiday figure, at least here in the US. For those of you not obsessed with Christmas lore, Black Peter is a child assistant to Saint Nick. Traditionally, he's the one charged with punishing children who were bad, an awkward bit of racist stereotyping which makes him an extremely difficult character to use. Since he never really took hold in America, it's pretty easy to skip him entirely and avoid the matter altogether.

This movie instead re-imagines him as a kind-hearted adult accompanying Saint Nicholas in his journeys. It's an attempt to reclaim the character while simultaneously raising him in prominence.

As a whole, the special isn't very impressive. Production values are lacking, and the setting is undermined by a barrage of anachronisms (I'm assuming these were intentional; regardless, they're not endearing).

The movie is narrated by James Earl Jones, who certainly lends some credibility to the frame story but can't help the story itself.

Despite all its problems, I wound up enjoying this quite a bit. The movie's redemption came from its portrayal of Santa Claus. Instead of the trite fat man, this version was more in line with European depictions of Saint Nicholas. Even when Santa and Peter moved to New Amsterdam and he began acquiring the American props and costume, he retained his gaunt face, more like a bishop's than a friar's. In addition, he was played seriously, without comic relief or over-the-top antics.

Ultimately, the movie isn't very good. If you're not a die-hard Santa-nerd, you'll find it tedious and pedantic. But the character of Saint Nicholas was so well handled, this Christmas geek enjoyed the experience.
90's Dramedy Erin Snyder Fantasy Movie