Book Review: The Solstice Evergreen: The History Folklore and Origins of the Christmas Tree, by: Sheryl Ann Karas 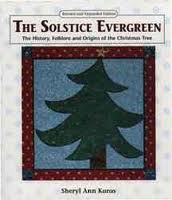 The Solstice Evergreen is a collection of myths and stories related to evergreen trees, which together are ostensibly supposed to make some sort of point about their prominence during the holidays. In her introduction, the writer, Sheryl Ann Karas, explains that she wasn't raised Christian but was fascinated by the existence of the Christmas Tree. The book is kind of about coming to terms with that.

It's an interesting premise, but I think this could have been done better.

There are a few components to this book. Each chapter begins with a short essay about evergreens, Christmas, or mythology, then abruptly shifts to a bunch of very short myths and/or stories. These are taken from all over the world, with a disproportionate number originating from indigenous people whose stories (we assume) were neither influenced by nor had any influence on the custom under discussion.

To her credit, Karas doesn't claim otherwise. The stories are included due to thematic and topical parallels. But, in the end, all this adds up to is evidence that people are fascinated with trees that live through the winter. That's not exactly a profound revelation, and it certainly doesn't justify anywhere near this much space.

Karas is clearly intrigued by the idea of storytelling more than a study of how myths migrate and customs evolve. While I appreciate her interests, there's a sense of irrelevancy that permeates the book. Picking up a book like this, one expects some information on how the tradition of the Christmas Tree developed. She goes into this a bit, but in nowhere near the level of detail I wanted.

The stories themselves also lack sufficient notes. Until the end, which offers a few with known authors, all Karas includes is the country of origin. There's no indication as to the date (if known), the number and diversity of variations, or any other information. Worse yet, after mentioning in the beginning that she'd written composites of some of the stories while leaving others virtually untouched, she neglects to tell us which fall into which categories. At the end of the book, I found myself unsure which stories were authentic and which weren't.

If it weren't for the essays, this thing would almost work as a storybook. Even then, most of the stories are lacking nuance or detail. Anyone who's actually interested in the origins of the Christmas Tree should really look elsewhere. There's really not enough in this volume to be worth the time.
Book Erin Snyder