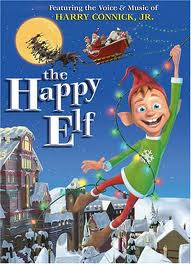 Okay, so apparently at some point Harry Connick Jr was delusional or high enough to think producing an animated special based loosely on a stupid song he wrote was a good idea.

And then somehow NO ONE involved thought: wait, this is a TERRIBLE idea!

Thus was born the steaming pile known as The Happy Elf. Ugh, even the name is boring.

The plot is idiotic, every single character is annoying. The only thing this has going for it is that it isn't very long.

Rob Paulsen plays the lead, and if anyone could have pulled it out of the dive and made the twitchy hyper obnoxiously Pollyanna elf charming, it probably would have been Rob Paulsen. But it was not to be. The dialogue is so terrible, and the performances are all painfully overwrought.

The animation... on a purely technical level, it might not be quite as bad as some of the CG we saw last year. It's bad, but the humans are maybe 5% less creepily mask-like. However, 99% of the designs and movements were poorly chosen, and the stylization of the faces of the elves is too far into freakish goblin-land.

It's just so BORING and stupid. The problem (the children in this town - which is apparently built to be depressing - are brats) is stupid, the solution (polished coal and holiday cheer?) is stupid, and the execution (hyper elf harasses children, polishes rocks) is stupid. Attempts at themes get their wires crossed and dissolve into nothing but forced wackiness.

Remember the classic Santa Claus is Comin to Town? Compared to Bluesville, setting of The Happy Elf, the domain of BurgerMeister MeisterBurger is a totally realistic presentation of human behavior and town politics. Have to watch this movie for some reason? Make it easier on yourself, take a drink every time they mention another completely ludicrous thing about this town - like that it's built at the bottom of a canyon, or the people are physically incapable of telling jokes. You'll be unconscious before the half-way point, and I'll expect a thank you later.
00's CG Comedy Crime Against Humanity Fantasy Lindsay Special