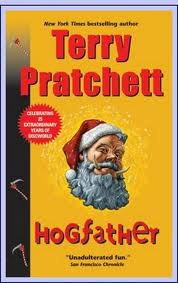 Premise: It's winter on the Discworld, so it's time for the Hogfather to bring presents to all the children. Except the Hogfather is missing. It's up to Susan, Death's granddaughter to save the day. She would really like to know why Death is climbing down chimneys, why new gods and fairies seem to be appearing, and what all this has to do with an Assassin with an unique view of reality.

I love many of the Discworld books, but this is one of my very favorites. It scratches all my holiday itches: the power of belief, ancient pagan roots, mocking "picturesque" holiday stories, and saving the world.

I love it from the very start. Here's page one:


Everything starts somewhere, although many physicists disagree.

But people have always been dimly aware of the problem with the start of things. They wonder aloud how the snowplow driver gets to work, or how the makers of dictionaries look up the spelling of the words. Yet there is the constant desire to find some point in the twisting, knotting, raveling nets of space-time on which a metaphorical finger can be put to indicate that here, here, is the point where it all began...

But it was much earlier even than that when most people forgot that the very oldest stories are, sooner or later, about blood.

I would just sit here and read you the whole book if I could.

I love Susan, stubbornly trying to make her own way without using too many of her innate powers (lest she use them too much and forget what doorknobs are for), and how she makes quick work of any nonsense standing between her and her goal.

I love Death struggling with the more illogical parts of Hogswatch, while grasping the deeper aspects better than any mortal. The villains are creepy and the side plots entertaining. This book has some of my favorite scenes with progressive young wizard Ponder Stibbons and his thinking machine, Hex.

Of course through all the action and excitement runs the satire that Discworld is known for, in this case largely turned against holiday stories and traditions that don't really make much sense. I was particularly satisfied by Death logically demolishing that blot on humanity, the execrable Little Match Girl story.

There's a great sequence about childhood terrors coming true, and I found the reveal of the villains' plan very well done. The book is full of quotable lines and ends with a series of climaxes that leave me feeling quite pleased and full of a darker, truer sort of holiday cheer.