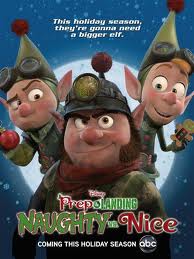 Well, this is depressing.

First the good news: this wasn't awful. In fact, taken on its own merits, it was even good. It was funny, cute, and kind of fun.

But that's just not good enough this time. This isn't a new special existing in a vacuum: it's the sequel to the single best Christmas special made in more than a decade. And this one doesn't measure up.

The original, while not being too dark for kids, was exciting. Yeah, half was devoted to heart, but when things turned, there was a real sense of danger. That was completely missing this time around: I never felt like the elves could actually die.

There were still some cool scenes, particularly the opening, which expanded the series's mythology by showing the other half of the operation: the elves there to punish the bad kids. For a minute, there was a darkness to the tone, but they just couldn't hold it. Almost immediately, we shifted to the comic relief. And guess who played that role.

If you said either of the two heroes from part one, you're wrong: it was both. Yeah, they're still capable of occasionally being useful, but overall they're played for laughs. For Christ's sake: Wayne was the elf equivalent of James Bond in part one. What happened?

If you're a big fan of the original, this is still worth seeing. There some good moments, and it's good to see Lenny and Wayne again, even if it has to be in these circumstances. But this series lost its edge. The first Prep and Landing is about a million times better, as is the short, "Secret Santa." Watch those first, then decide if you want to see the follow-up.
2011 Action CG Comedy Erin Snyder Fantasy Special Spy