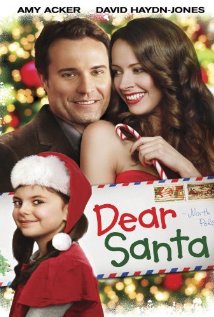 I am unprepared for this review. It's not easy for me to admit as a writer, but I'm just not ready for this: my language skills aren't up to the task. So I'm going to need you to give me a moment. I just have to duck out of this tab, go over to Thesaurus.com, and look up as many synonyms as I can find for the word "stupid."

Alright. I think we're ready to get started.

The opening credits are in a font that's supposed to mimic a child's handwriting, but the bright green color makes them nearly indistinguishable from comic sans. At this point, we thought we had a pretty good idea what kind of movie we were sitting down to watch, but we were wrong: this montage was, inexplicably, the most thoughtful section of the film. Everything that came after was significantly more idiotic.

We're introduced to the movie's star, played by Amy Acker making the most dunderheaded decision of her career. She's portraying Crystal, a vapid and naive daughter living off her even more moronic parents' wealth. In the middle of a shopping trip, a stray letter blows in front of her after a doltish mailman fails to successfully convey a bunch of envelopes from a mailbox to a satchel.

Crystal, of course, pockets the letter and goes on to spend more of her parent's money. Her parents are on a vacation, but her mother calls her a few times. Rather than using a phone, she video-conferences with Crystal over her laptop, allowing us to see where she's located.

It appears that she is calling from in front of a green screen.

At any rate, her dense parents aren't so dense that they're happy with Crystal maxing out their credit cards (though they don't seem to mind her living in their Manhattan apartment). She's given an ultimatum: get a job (or a man) by Christmas, or she loses her allowance.

Let's talk about that letter Crystal found. Just so we're clear, this letter is legally the property of the US Postal Service, and by opening it, Crystal is in fact committing a felony. This inane movie never once acknowledges that, by the way.

The content of the letter. I'm sorry: I just need another minute. The puerile letter is written by a young child whose mother died a while ago. Her father is oh, so lonely, and her one Christmas wish is....

So of course Crystal stalks the father from the letter. She goes to his house, which is located on the West Side and spies on him. And on his daughter. She follows them in her truck, as they drive down the road on the West Side. Her actions are so unethical, you could almost be distracted enough to not notice that they're driving around empty suburban streets containing large houses in what we're still supposed to believe is NEW YORK CITY.

I don't need to keep telling you the dumb plot of this ludicrous movie. I don't even need to tell you about the brainless dialogue. Because every simple, dull beat - every empty, hollow line - follows a formula so obvious, you can literally predict what's about to happen or be said before it occurs. And the only points where this imbecilic film deviates are those where it manages, against all odds, to fall short of your expectations, which start out extremely low but continue to fall further and further as the 90 minute runtime progresses.

This thing is so half-baked, it.... No, wait: I already used half-baked. What about dunderheaded? Nope - used it in the third paragraph.

Shit. The English language is insufficient for conveying just how monumentally stupid this movie is. Looks like I'm heading over to Google translate.

We haven't even talked about the other characters, yet. The love interest is, astonishingly, even more hloupý (Czech) than Crystal. Derek is a widower raising a daughter while running a snowplow company.

A snowplow company, I want to remind you, in New York City. He's incredibly busy, of course, because of all the snow that's around RIGHT BEFORE CHRISTMAS EVERY YEAR. We see this snow on the ground, by the way. I doubt that get this much snow in Alberta, in fact. Hey - don't they shoot a lot of these movies in Alberta?

But that's just his job. What really matters to him, other than his daughter, is the soup kitchen he owns.

I guess we should just roll with this.

The homeless, of course, are old and sad, but remarkably clean, nonthreatening, and polite. The cook is a flamboyantly gay man who is good enough to work in an upscale restaurant, but instead is in a soup kitchen for some reason that's never shared with us.

Presumably because he is gay, Crystal confides with him about the letter after she starts volunteering at the soup kitchen to get closer to the man she's stalking. He believes in fate, so he helps her instead of calling the police or warning Derek that an insane rich woman is stalking him.

There's also a minor Jewish character who pops up to offer advice to Crystal. The only person missing was a stereotypical, mystical black character. I half-expected them to introduce someone like that, but the movie managed to subvert this expectation in the only way possibly more offensive: they didn't give a non-white actor a speaking role in the entire film.

The last significant character is Jillian, the movie's antagonist. Jillian is a rival love interest for Derek. He doesn't actually love Jillian, but he is planning to propose to her, so that his daughter, who hates Jillian, can have a mother.

It's worth mentioning that Derek is astonishingly i trashë (Albanian), as he has no clue, whatsoever, what anyone is thinking or feeling. For example, when Jillian and Crystal get into a physical altercation and start flinging food at each other, he just kind of looks on, confused.

Whoever wrote this movie was mūṛha (Bengali). The characters are unlikable and their thought processes are completely incomprehensible. Moreover, we've seen these tropes so often, the final experience isn't even so bad it's good: it's just boring.

Do not, under any circumstances, watch this dwp (Welsh) movie.
2011 Drama Dramedy Erin Snyder Movie Sucks