Book Review: The Raven in the Foregate (Cadfael Series) 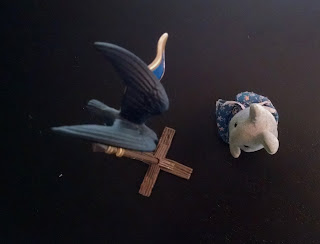 The Raven in the Foregate (Cadfael Series)
Ellis Peters, 1986

This is book number twelve in the Cadfael series, but I jumped ahead to it because it's set explicitly at Christmas.

Premise: In 1141, a new priest comes to the town outside the abbey. He is harsh with the people and quickly makes enemies. The woman and young man who came into town with Father Ailnoth are not who they say they are, and all mysteries must come to light after a violent death on Christmas Eve. 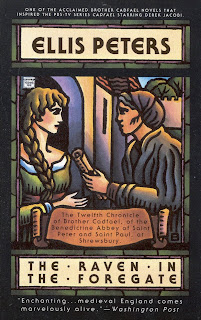 I've very much enjoyed all of the Cadfael books I have read, although this one seems to retread some ground. Cadfael's friendship with and patronage of the young couple particularly, is a repeated thread in more than one of these stories. It's still an enjoyable yarn, with the final solution to the mystery held secret to the end, despite how steadily pieces are revealed.

Cadfael, as usual, keeps his own counsel and works only for what he thinks is the best outcome for all concerned. If you haven't read any of the books, or seen the PBS series starring Derek Jacobi, you'll enjoy meeting the down-to-earth herbalist with a knowledge of both early forensics and what drives men's hearts. I understand why for story reasons the reader occasionally follows other characters, but I prefer more straight Cadfael in these books.

One of the plots in this volume pertains to the struggle for power in England at this time between the Empress Matilda and Stephen of Blois. Some basic knowledge of this time, either from reading other books in this series or just from general history, will be helpful in following the motivations of various characters.

The presence of Christmas is strong enough, I think, to give this credit as a Christmas story. The murder is done during the overnight service between Christmas Eve and Christmas Day, as is the first meeting of the young couple. The riddle's solution is discovered on New Year's Day.

This isn't my favorite Cadfael volume I've read, but it is a decent entry in the series, and paints a picture of what Christmas may have been like in both abbey and town in 1141.