The Simpsons: The Nightmare After Krustmas (2016) 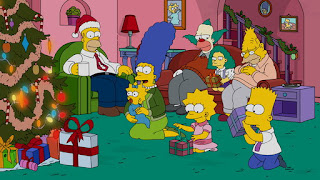 We definitely haven't seen every Christmas episode of the Simpsons, though we've discussed the original holiday special, along with a few other early Christmas installments. Eventually, we may track down the others, but that could take some time - the series is on its 28th season, after all. But we stumbled across this recently aired episode on Hulu and decided to cross at least one more off our list.

The plot, in classic Simpsons fashion, is more than a little disjointed. Attendance is down for Reverend Lovejoy's services, leaving him unsure how to proceed. Meanwhile, Krusty the Clown is trying to bond with his daughter (I'm assuming this was from a season I haven't seen). Krusty is wounded by a wind-powered machine, which leads to further difficulties in their attempt to find common ground: he's a Jewish clown, while she's a Christian with no interest in show business. In an attempt to help, Marge invites them both to celebrate Christmas with the Simpsons.

Krusty shows up but brings a camera crew with him, so they can shoot a special. This infuriates his daughter, who throws him out. Lovejoy finds Krusty at his lowest and sees an opportunity. He convinces him to convert to Christianity. Krusty does so, resulting in his show becoming far less entertaining. In an attempt to make the conversion official, Lovejoy tries baptizing Krusty, despite the fact it's the middle of the winter. Krusty almost drowns and has a near-death experience in the freezing water, where he sees a vision of his father telling him it doesn't matter what faith he subscribes to, only that he becomes a better parent.

The episode wraps up by reverting to the status quo, with Krusty returning to Judaism and Lovejoy's flock coming back (he's seen as a hero after saving Krusty). It's a mangled episode with a lot happening, but not a great deal substantial.

Again, for both better and worse, that's the recipe for most episodes of The Simpsons.

Overall, I generally found it funny, though not hilarious. The best was a subplot involving an "Elf on the Shelf" stand-in called "Gnome in your Home". Homer and Marge bought it for Maggie, thinking it would be fun, but it terrorizes her nightmares until she snaps, destroys it, and sets out to on a quest to kill as many as possible. The episode ends with her riding down a dozen or so with a lawnmower. It's always fun to see Elves on the Shelf lampooned and destroyed, but the observation those things are creepy isn't exactly original.

All in all, a fine episode, but definitely not a classic.
2016 Comedy Episode Erin Snyder