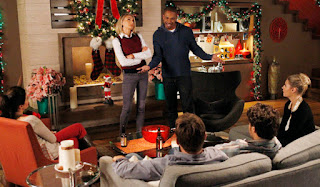 According to the internet, a lot of people were devastated when this series was cancelled after its third season. This knowledge leads me to one of three conclusions:

1. This is one of those shows you need to watch for a while before it gets good.
2. This is a case where some episodes are much stronger than others.
3. This show's fan are extremely generous viewers.

We absolutely hated these two episodes. The characters felt two-dimensional and dull, the stories were absurdly idiotic, and the tone didn't gel with the writing. I kept thinking I was watching a live-action show set in the world of Family Guy.

This is (yet another) circle-of-friends sitcom in the vein of, well, Friends. It goes for a farcical, over-the-top tone, like the far superior Community, but I didn't feel like it committed enough to sell it. As a result, it came off as unrealistic people behaving unrealistically. I knew intellectually that was supposed to be funny, but I just didn't enjoy it.

Let's talk about the holiday episodes in question, shall we?

By my count, there are three separate stories going on in this episode. The best of the bunch concerns Max, who takes a part-time job as a mall Santa despite being Jewish. Despite being self-obsessed, the job gets to him and - against his wishes - makes him a better person. There's not much to this that's memorable, but it's not especially obnoxious, either. A low bar, perhaps, but it's more than I can say for the story line concerning Jane and Brad.

These two are a neurotic married couple who are planning to go away for the holiday. Jane accidentally switches an envelope holding $2,000 of spending money they'd pulled out of the bank with an identical one holding $200 they give to their maid, and they spend the episode trying to find a non-confrontational way of getting it back.

The last plot is sort of a side-story about Alex's "coupon books" she gives out as gifts every year. These are things she makes herself promising indoor beach parties, dinner and a DJ, and the like. In an effort to shame her into admitting these are a dumb gift, her ex, Dave, redeems all of his coupons. But she happily honors them, delivering on the bizarre concepts. There's not much to this: just an excuse to have a series of weird things going on through the episode.

No-Ho-Ho (2012)
This episode opens with the revelation that Jane's been lying about her birthday: she was actually born on December 25th, but she "moved it" to July as a kid after she became sick of sharing it with Christmas. Her friends decide to throw her a birthday party on her actual birthday to make up for it.

Most of the episode is defined by the characters struggling with their urges to do Christmas things on Christmas. Everyone's presented as an addict for some specific aspect of the holiday - one is obsessed with eggnog, another becomes fixated on opening gifts, and so on.

Eventually, their obsessions explode, destroying the party. Jane walks out, furious at Christmas, then wanders into a bar full of others born on the 25th. They meet annually to celebrate among others who understand them. Briefly, Jane thinks she's found kindred spirits, until she learns they're extremists planning to go out afterward and smash every Christmas decoration they can find.

Overall, I found this a little better than the prior year, but only because I really, really hated the first episode. This one had a couple funny moments, but overall was still tedious and dull.

Like I said at the start, it's certainly possible this is one of those shows that gets better and better the more you watch it and get to know the characters. But I have absolutely no interest in testing that theory.
2011 2012 Comedy Episode Erin Snyder Sucks