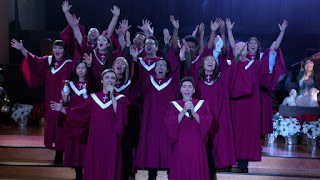 A sitcom aired this year that I’ve never heard of? That… that sounds right. I'd be more surprised if I had heard of it.

So, this new sitcom is about an Irish-Catholic family in Chicago who, after propping up appearances for too long, are forced to deal with a series of reality checks. This includes the parents’ divorce, and one of the sons (Kenny) coming out as gay.

In this episode, the mother, Eileen, is determined to lead the church choir to victory in a caroling competition. Kenny is part of the choir, and supports her efforts at first. She also sends her athletic, if dim, older son Jimmy to spy on the Episcopalian competition.

Meanwhile, the father Pat is with their youngest, Shannon. (All of the kids are teenagers, close in age.) She is a sardonic, intelligent kid, excited that her boyfriend has given her what she considers an excellent Christmas present: a watercolor of her hero, financial adviser Suze Orman.

She declares that she has to give him a great present in return, something only she could give him. Of course, now the father becomes paranoid and tries to find out whether she could be planning to have sex.

Eileen’s plan to recruit another young man with a strong voice to save the choir backfires when he’s a better singer than Kenny. Kenny becomes tremendously jealous and tries to undermine the new guy.

This comes to a head when said new guy (Brett) finally reveals that he only joined the choir to get to know Kenny, and there’s some adorable teenage affection.

Pat finally confronts Shannon, but the girl reveals that of course she’s not having sex, she’s built an elaborate meta-themed diorama as a present.

After Brett leaves the choir so Kenny can keep the solo, Kenny convinces his mother to try something different for the choir competition that everyone can be a part of. The resulting mash-up performance of O Holy Night is fairly charming, if a little reminiscent of Glee. They don’t win, but all the members of the family are happy with the outcome.

This was surprisingly decent. It was funny, had strong character-based writing, and packed a lot of plot into a half-hour.

We have no idea whether the rest of this show is any good, but we found this episode on Hulu.
2016 Comedy Episode Lindsay