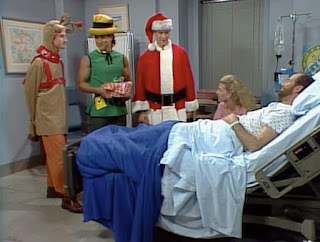 I place Saved by the Bell in a similar category with Full House. Both shows aired around the same time, and many in my generation - myself included - are growing nostalgic for the joy of hating them.

Looking back, I'm not entirely sure how Saved by the Bell was green lit, produced, aired for multiple seasons, or made money. I don't think I've ever met anyone who unironically liked it. The series was truly and profoundly idiotic. It was aimed squarely at teenagers, but it talked down to its viewer, offering overly simplified solutions to watered-down problems.

Take this two-parter from the show's third season, for example. As far as I can tell, this is the only Christmas episode produced for the main series. It centers around a Christmas play the kids are putting on in the mall and a homeless teenage girl Zack has a crush on.

Laura is living out of a car with her father, who's unable to find work due to lacking a physical address. She works in the mall, but of course that's not enough to afford a place. I should probably mention that the revelation she's homeless doesn't come up until the end of the first episode, despite being painfully obvious to the viewer.

We meet her and her dad separately - he's clean cut, polite, articulate - the opposite of what we'd expect when hearing the term "homeless," in case you thought they weren't going to wedge in a heavy-handed moral about making assumptions.

At any rate, their relationship comes out when he collapses at the mall and is taken to the hospital. Zack invites the two of them over for dinner and talks Laura's boss into giving her some time off to be in their production of A Christmas Carol (in exchange, they shill his department store on stage). Due to a misunderstanding, her boss then assumes a missing suit jacket was stolen by Laura, since she wanted to give it to her dad and he thinks the homeless are all thieves (again with the important lessons).

Everything gets straightened out, he apologizes and gives her the coat in a truncated Scrooge moment, then Zack's mother offers to let Laura and her dad stay with them until they get their own place.

Because homeless people deserve a second chance IF AND ONLY IF their daughter is hot, they have no mental or physical handicaps, and they look professional. I get that they were trying to drive home a point about economic prejudice, but simplifying the complex economic issues connected to poverty and homelessness to "help a friendly looking white person" really doesn't address the root problems. And, like so many other holiday episodes with the same message, it doesn't even touch on the fact that Zack's family's wealth is protected by the same system that discards others.

Forget all that for a minute. And, while we're at it, don't worry about the fact no one hesitates before letting Zack and Laura live in the same house. Nor should you worry about long term continuity - as far as I can tell, the show never brings any of this up again. All of that stuff is just content, while sitcoms ultimately boil down to the experience they offer. What really matters is whether this was fun or humorous.

But of course it isn't. The jokes are as flat and uninspired now as they were in 1991. This is pablum - empty formulaic lines punctuated with canned laughter, without which you'd miss that they were jokes at all.

If you'd like to relive the experience of settling for this on Saturday morning while waiting for something better to start, Hulu has the series up. Go ahead and watch these episodes. I dare you.
90's Comedy Episode Erin Snyder Sucks