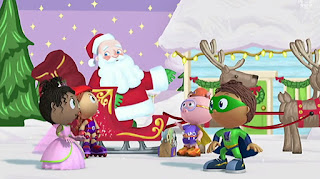 At one point while we were watching this, Erin turned to me and asked in disbelief, “You’ve watched this before?” What can I say, I used to work a lot of nights before we had Netflix; on many afternoons PBS was my background-noise companion.

Super Why! is one of the least interesting of the PBS kids shows that I’m familiar with from this era. It’s not so annoying that I would necessarily turn it off, you know, if my hands were covered in paint or something, but I wouldn’t seek it out.

The show follows Whyatt and his fairytale friends who live in Storybrook Village (which is a CG land hidden behind a secret door on a library bookshelf). In each episode, Whyatt (his big brother climbed a beanstalk), Pig (of the Three Little), Red (Riding Hood), and Princess Pea have a question to answer. They seek the answers by becoming the Super Readers, magically flying into another storybook, and helping the characters there.

And yes, we’ve got a bit of book-within-a-book-world going on. The story they visit is always populated by 2D characters and sets, while the Super Readers remain 3D.

The best part is, they need your help!

Are you ready to help them find the Super Story Answer?

Each character has a transformation and a word-related power, like spelling or reading, which comes up in easy little sequences that YOU are encouraged to play along with. Because you have the power to help.

In this episode, Whyatt wants to know why Santa visits kids on Christmas, so they visit ‘Twas the Night Before Christmas...sort of. The tiny bit of the poem they read switches out Santa Claus for St. Nick, and all that happens is that Santa visits a kid’s house.

After Pig catches some falling toys (and we learn that E is for elephant and K is for kite) and Princess Pea spells “snack” to lure Santa down to the roof, Whyatt uses his spelling wand-thing to change the story so Santa can come down a ladder, because this house has no chimney.

Santa tells them about how much he loves to give presents that he’s made himself, and how happy it makes him and the people who receive them.

THE SUPER STORY ANSWER IS HAPPY. GOOD JOB, YOU FOUND IT!

If have a child at the age for interacting with the TV, a bunch of Super Why! is on Netflix.