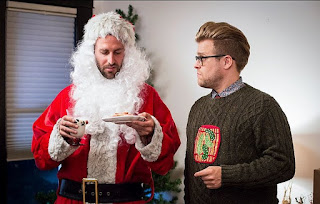 I've seen several episodes of the series, "Adam Ruins Everything" and I've enjoyed it quite a bit. That said, I think it has a tendency to fall into a similar trap that often snared Penn and Teller's Bullshit: it challenges a common, oversimplified narrative and replaces it with a less common, oversimplified narrative. In the process, you get a decent amount of trivia, but if you accept the episode's conclusions are completely true, you're really no better off.

With that in mind, I'd like to try a slightly more meta approach to the Christmas episode, which contains clever humor and some interesting information, but doesn't really paint any more accurate a picture of the holidays than the one it deconstructs.

The episode, as usual, is broken into segments examining different aspects of the holiday. The first takes on the subject of the non-Christmas roots of several Christmas traditions, including low-hanging fruit like the absence of evidence of Jesus's birthday and the large number of elements taken from Saturnalia. This is all accurate, but Adam slightly oversteps when he implies that the December date was chosen by Christian leaders for the express purpose of appealing to potential converts.

This is unlikely. I'm a strong proponent that Christmas should be viewed as the current incarnation of an extremely ancient mid-winter festival, but it seems far more likely that the fusion of older festivals with Christianity was organic in nature. The blending of myths and traditions is a common phenomenon that occurs whether those in power are trying to aid or hinder the process (and there have certainly been attempts to do both in Christmas's history).

This segment also cites another claim I'm all too familiar with, that Christmas was a "debauched, violent, booze-fest" for the entirety of the Middle Ages. To back this up, the episode cites some evidence about Christmas in England.

It's a very common claim, likely popularized due to the fact it's an interesting counterpoint to the even more inaccurate image of a uniformly solemn and pious Christmas. But while it's absolutely true the holiday hasn't always been religious or peaceful, I don't buy this inverted narrative, either: it conveniently glosses over the entire rest of Europe, focusing on just England, as if that offers the sum total of the Christmas experience prior to America.

Soon after, we move onto the next segment: gifts. Adam challenges this practice on the grounds of simple economics. Perhaps too simple.

The show claims Christmas gifts "make no economic sense," citing the discrepancy between what the buyer pays for a gift and what it's worth to the recipient. The difference, almost always a deficit, is portrayed as lost value.

Okay, granted, there's a point here. When we buy gifts for others, we tend to be willing to spend more due to time constraints and desperation. And I'll bow to the research and calculations done by the episode's guest expert.

But while this is a fun exercise, it's an incomplete definition for the economic value of a gift, which is only partially represented by the material object.

Don't worry - I'm not talking about love or anything. I'm talking about the monetary value placed on the experience of both the giving and receiving of the gift.

This is more obvious in the cases of gag gifts; things with essentially no long-term value to the recipient. In these cases, the person purchasing the gift is paying for the opportunity to make a joke. The value of that joke is essentially whatever the buyer subjectively assigns it.

I think that comes closer to encapsulating the decision most people undergo when selecting a Christmas gift. Granted, you'd also want to consider additional costs - wrapping, time spent acquiring the gift, gas money, etc. But I suspect this aspect of the gift exchange goes a long way towards reconciling the estimated twenty billion dollar difference between money spent and value perceived.

The last segment concerns itself with the history of Santa Claus, and once again it's vastly oversimplified and often misleading. The episode claims Krampus is a replacement for Santa, when every tradition I'm familiar with casts him as a helper for Saint Nick. Likewise, Adam speeds through a version of the classic story of St. Nicholas giving gold to girls and in the process warps the details by cherry picking the creepiest elements available and omitting needed cultural context.

All that said... I really enjoyed this episode. While I can quibble with the conclusions, the presentation was incredibly enjoyable, thanks largely to a frame story involving recurring characters and elements cleverly drawn from classic Christmas specials. The conclusion regarding the true meaning of Christmas is also great, though Community worded it better. Plus, it offers a wonderful epilogue I wouldn't want to spoil.

This episode - and indeed this series - is something I'd recommend highly... provided you apply the same level of skepticism towards the show's claims that the show asks you to direct towards the world around you. It offers a fun, if brief, look at misconceptions generated by the complexity of history; just don't mistake its alternate narrative for the complete truth.
2016 Comedy Documentary Episode Erin Snyder Highly Recommended