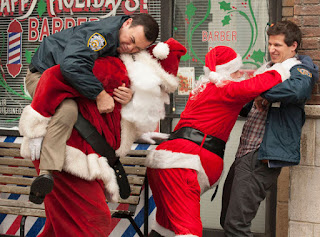 Brooklyn Nine-Nine is essentially a parody of every other cop show on TV. In that sense, it's sort of an update of Police Squad. Based on the holiday episodes I just saw, that comparison might actually be fair - this was surprisingly good.

The episode's A-plot concerns death threats made towards Captain Holt. His boss commands him to accept a protection detail, so he assigns Detective Jake Peralta (the series' lead, played by Adam Samberg) the job, assuming he'll blow off protocol as usual. However, the assignment gives Peralta total control over the movements and activities of his Captain, so he instead abuses the situation.

There are some hi-jinks involving a safe house, where Peralta handcuffs himself to the captain and tosses the key down a grate; the sort of stuff that would normally be tiresome and dull. But the cast pulls it off, selling the slapstick through their bizarre characters. The same commitment and skill allow the B-plots to work: Terry Crews's Sergeant Jeffords spends most of the episode in therapy, while Detective Santiago tries to find a loophole in the Captain's "no gift" rule (which is a running gag in future holiday installments).

By the end of the episode, Peralta convinces the captain to accept help tracking down the man threatening him, and the precinct manages to catch the would-be killer, though one of the detectives is shot in the butt in the process.

The holiday elements here are more pronounced than the synopsis makes them sound: the show opens with an unrelated bit where Samberg and his partner fight a pair of disgruntled Santas, the gift gags come up several times, and there are quite a few decorations. All that said, there's nothing about the premise of the main plot that demanded it take place at Christmas - the setting is mostly incidental.

This episode opens with Peralta undercover as a Salvation Army Santa staking out a stretch of sidewalk where Doug Judy, the "Pontiac Bandit," was spotted. Apparently, the bandit was a criminal who escaped Peralta in an earlier episode. Despite blowing his cover, Peralta follows Judy to a Christmas Tree lot, where he manages to apprehend him. He also manages to set the trees on fire, but he's too thrilled at having finally caught his nemesis to care.

However, Judy doesn't go quietly. Instead, he arranges a plea deal: he'll help them catch a major drug lord in exchange for a reduced sentence. As usual, this spirals into absurdity - this time, they end up partying in a hotel room before Judy finally sets up the meeting.

They manage to shut down the drug ring and arrest the leader, but Judy escapes with the help of an accomplice. Despite catching the far more dangerous criminal, Judy's escape grates on Peralta.

Once again, the B-plots are more holiday-centered than the A. Two characters' parents are in a relationship they worry is getting serious: a Christmas gift seemingly defuses then confirms their concerns. Meanwhile, Santiago attempts to subvert the captain's gift ultimatum by making him a scrapbook of his career, only to uncover an error from his early career.

Like before, the actors sell the entire thing, even the stuff that should be too over-the-top.

The previous two Christmas episodes were set at the holidays but weren't significantly connected. This one breaks the pattern in a major way. After forgetting to buy a gift for Boyle, Peralta ropes Gina into helping him, only for Boyle to tag along, thinking they're looking for a gift for Santiago. This leaves them in a department store at closing time on Christmas Eve.

That's when the robbers show up and start taking hostages.

Instead of being scared, Peralta is exhilarated: finally, he's getting a chance to live out a life-long Die Hard fantasy. He starts naming the criminals after villains from the film and taking them out using action movie-style antics. His utter dismay at discovering they're Canadian and not German is wonderful to watch.

At the end, he sacrifices his chance of getting a real John McClane moment in order to protect his friend, and Boyle gets to shine. Peralta comes clean about forgetting a gift, and Boyle points out that giving up his chance to be a hero was a gift. But by that time Peralta is more fixated on the fact Boyle screwed up the catch phrase.

While I felt that Peralta's character shifted between seasons (and preferred him in one and two), the premise of this was wonderful. This took a Christmas classic and ran with it in an original way - I really enjoyed this one.

Once again, Brooklyn delivered a quirky, fun holiday episode. The characters shifted again: Boyle is married with an adopted son now, and the captain's competency level and dedication definitely weren't on par with what I saw in earlier seasons, but I didn't really care. I get the feeling the show has quite a bit of continuity, but I didn't need context to enjoy it.

The A-plot for this revolves around Boyle and Jake trying to track down a missing gift for the aforementioned son. Only the present was part of a shipment stolen by a Latvian gang the two go up against. Boyle taps into - and he's extremely specific about this - his maternal instinct, which he's able to weaponize to incredible effect.

As the episode progresses, he gets more and effective and driven, until he's about to risk his life to get the present back. Jake stops him, however, not wanting to get his partner killed on Christmas Eve. In the end, they take down the gang but fail to save the toy. Not that it matters: it's just a stupid toy.

Meanwhile, the rest of the cast is competing in an annual caroling competition that a group of MTA employees always win. They scheme, cheat, and ultimately make fools of themselves - just what you'd expect. If you handed this premise to most casts, I doubt the results would be watchable, but once again, this group pulls it off.

Overall, I really enjoyed watching these. I suspect I'd like the series, too, but - honestly - I just don't have the time. Nevertheless, if you're looking to kill thirty minutes this season, any of these episodes are well worth the time.