The Amazing World of Gumball: Christmas (2012) 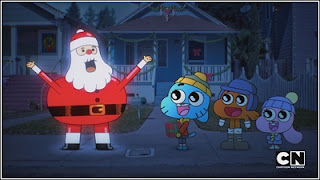 Well, that was odd.

We’d never seen an episode of The Amazing World of Gumball before, and it seems unlikely that we ever will again. Not that this was bad or anything, it just seems like the kind of thing you might watch if A) you had cable and B) you had a lot of time on your hands and were prone to watching whatever came on next.

I mean, it’s on Hulu, but so are a lot of other things.

This show seems to follow a family of animals - the mom’s a cat, the dad’s a rabbit, and there are three kids: a cat, a rabbit, and what Wikipedia tells me is an adopted goldfish. Eh, all the character designs are round enough that the distinctions don’t seem to matter.

The animation style is the most striking thing about this show - highly stylized cartoony characters are layered over real-world backgrounds and combined with occasional CG and stop-motion.

This episode opens with a little Christmas singing, abruptly cut short when the dad hits a man with his car who’s dressed a little like Santa. They bring him to the hospital, and the dad freaks out that he hit Santa. This begins the least interesting running gag in the episode: the dad starts racing around town trying to do good deeds to get back on the nice list, but they always end in destruction or injury.

Because it’s a comedy-sitcom sort of cartoon, the man has amnesia and the family has to take the guy home with them. He’s visibly dirty and smelly, and the mother objects, repeatedly.

The kids make a series of attempts to get “Santa’s” memory back, but he acts fairly un-Santa like, including telling the girl she’s selfish and mocking a wish for world peace. After a few further shenanigans, the mother decides there’s nothing else to do - she tells the kids there’s no Santa, that she wrote letters as a child that were never answered.

They take it poorly, heading out to destroy decorations and cancel Christmas.

Around this time, the father, still looking for good deeds, finds a sleigh and a reindeer and decides to return it to Santa. He accidentally takes off and begins flying erratically around the neighborhood, dropping gifts. One conks the smelly bum on the head and he is suddenly transformed - it turns out he WAS Santa all along!

The kids eventually use Christmas lights to create a runway to bring the sleigh safely down, and Santa heads out in time for Christmas to be uncanceled. First, though, he shows the mom that she had been sending letters to the South Pole by mistake and gives her a belated gift.

We both agreed that this was a pretty decent, even amusing episode, but nothing exceptional.
2012 CG Comedy Episode Lindsay