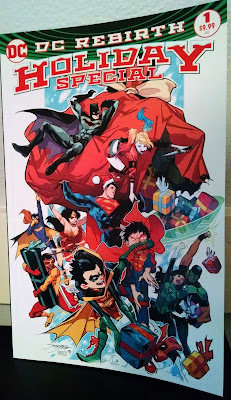 Huh. This was much better than I expected. Not quite solid enough for me to go back to being a firm fan of DC, but enough to get me cautiously hopeful that some of their comics might not suck right now.

This thick prestige issue consists of ten shorts and an interstitial framing device: Harley Quinn throwing a star-studded holiday special. The frame story is mostly funny and cute, completely surreal and not even bothering to pretend to be in continuity with anything.

The best stories, in my opinion, are “The Last Minute” and “The Night We Saved Christmas.” The first has a lot of the superfamily stuff that I adore that was missing from the DCU for a while. It has Superman and Batman being friends, Superman (I like this Superman! Yay!) shopping for a last-minute gift, and Damien Wayne and the new Superboy (Jon Kent) being adorkable.

The second is a Detective Chimp adventure with Batman as a supporting player. It’s funny, snarky, and thoroughly enjoyable.

There’re two one-page pieces: New Super-Man and Nightwing/Batgirl, and both are cute if really, really short. The story with Constantine and Wonder Woman was intriguing but ultimately not fully satisfying. A Titans piece and a Flash piece both have their moments.

Then we come to the lowlights: The Krypto story felt redundant, the Batwoman one was confusing, and the Green lantern story was obvious.

Overall it did what I’m sure it was intended to do - pulled in people to sample a bunch of current characters with the hope that one or two would land for any given reader.

I did find it a mixed bag, and expensive as well. But, there were no terrible pieces, and a couple pretty good ones, which makes it not bad for a holiday sampler.
2016 Comic Lindsay