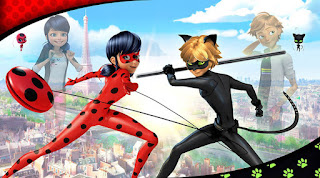 If you like crazy Christmas stuff the way we do, or if you like zany superhero/magical girl hijinks, you should probably go ahead and see if you can find a copy of this on YouTube. This was a ton of fun.

Miraculous (for short) is a CG show from France about two superhero teenagers. Marinette is an aspiring fashion designer, and she transforms into Ladybug. Adrien is a young fashion model, and his superhero identity is Cat Noir. They don’t know each other’s secret, which leads to a classic secret identity plotline where Marinette has a crush on Adrien, but Cat Noir has a crush on Ladybug.

Their powers come from little (alien?) creatures and are channeled through items known as the Miraculouses: Marinette’s earrings and Adrien’s ring. There is a villain (Le Papillon in the original French) who wants to steal these items. In each episode, the villain senses someone feeling a strong negative emotion (anger, fear, jealousy, etc.) and sends an evil butterfly to possess them.

That’s what you should know up front.

This episode, unlike most, is a musical, and opens at breakneck pace with Marinette singing about the holidays in her parent’s bakery. When she sees Adrien’s bodyguard come in to pick up an order, she rushes to give him her Christmas present to give to Adrien. The guard dutifully delivers it, but Adrien is depressed because his mom isn’t there for the holidays (it’s implied she’s dead, but Wikipedia says she’s missing) and his father is distant and cold.

He transforms in frustration and roams the rooftops of Paris, singing (angrily) about being lonely. He finally stops short of destroying a giant Christmas tree and instead blows up a display with his picture on it. He transforms back to normal, only to find that his little companion is cold and hungry after all that.

Adrien’s father, meanwhile, has discovered that he’s missing, and all the teenagers and families go out looking for him. Marinette, naturally, searches as Ladybug.

(Side note: they both have straight-up magical-girl-style transformation sequences. There’s a lot of Sailor Moon in this.)

Adrien meets and befriends a man dressed as Santa (Pere Noel in French, of course), who gives him a snack and offers to take him home. Ladybug misses them but finds the destruction Cat Noir left behind and decides that Cat Noir must be protecting Adrien from a supervillain. (Yes, this is contrived. Go with it.)

When Santa and Adrien return to Adrien’s house, Ladybug catches up with them and accuses Santa of being a puppet of Le Papillon, hauling him off for questioning. Adrien can’t go after her because his father’s staff are there taking him inside and keeping an eye on him.

Ladybug realizes her mistake, but not before roughing up Santa some. Santa is frustrated and resentful of her accusations, which ironically gives Le Papillon the opening to actually possess him.

Here’s where things get awesome. The evil butterfly turns “Pere Noel” (Father Christmas) into “Pier Noel” (Worst Christmas). The English subtitles try to translate the pun into “Bother Christmas,” although that isn’t as good. Pier Noel proceeds to fly his sled in a rampage across the city, destroying presents and bringing people gifts full of tarantulas and cockroaches.

Ladybug and Cat Noir are soon on his tail, but he is able to drive them off. Ladybug wisely uses her “Lucky Charm” at this point. This is her main power - it creates a useful item and gives her the ability to see how to connect things to Macgyver a solution to her problem.

In this case, they create a big present and lure Pier Noel to the top of the Eiffel Tower. Cat Noir sings about how they surrender, but they offer him a gift for Christmas anyway.

And for maybe 30 seconds you think that the magic of giving is going to fix him.

And then Ladybug bursts out of the box to kick his butt. In a coordinated move, Ladybug holds him down and Cat Noir uses his destructive powers (“Cataclysm,” naturally) to turn the hat that’s been infected by the evil butterfly to dust.

Everything goes back to normal and everyone’s invited to Adrien’s for Christmas Eve dinner. Hooray!

The action and hilarity of this was fairly non-stop. They packed a LOT into 22 minutes. I started being intrigued by this show because I was amused by the character design of a boy in a black catsuit, but it’s a genuinely fun, modern entry in the magical girl genre.
2016 Action CG Comedy Episode Lindsay Superhero