Book Review: St. Nicholas and the Valley Beyond: A Christmas Legend 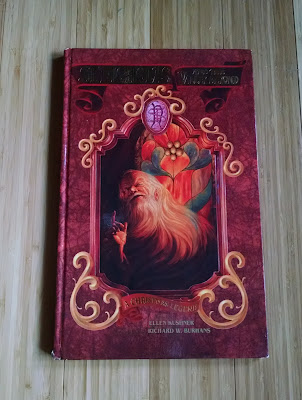 We bought this on clearance at a used bookstore, mainly because it was pretty, shoved it in a box for a few years, then came across it while unpacking. I finally sat down and read it, and...

...I already mentioned the art was pretty, didn't I? Because it is. Really nice fantasy artwork in an large picture book (about 15 inches tall) designed to invoke illuminated manuscripts or something. Pretty.

There's also a story inside, written by Ellen Kushner.

Once more, the artwork is quite pretty.

The story opens with a poor, cold, hungry orphan named Nicholas following mysterious voices that lure him into a magic valley. He finds a party, goes in, magically transforms into a grown man, meets a woman, and gets married. 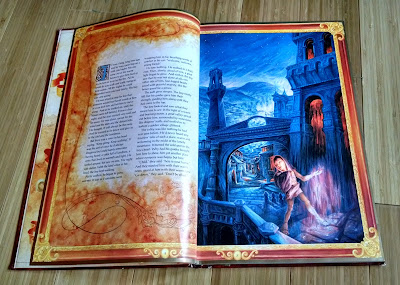 They get to know everyone in the valley - they're all artisans (toy makers, mostly) - and none of them knows there's a world beyond their borders. Not even Nicholas knows this: he forgets his past. Also, he moves into a castle with his wife.

Also, there's a riddle: "No hands can make me, two hands can shape me, all hands can take me." It's an ancient riddle connected to a prophecy that someone will come into the valley and save it from sinking.

Then a kid appears. Magically. He just kind of materializes from Nicholas's imagination or something. Nicholas takes the kid around on a train, and the kid does a bunch of random magic. Eventually, they learn that all the toys the valley is producing are weighing it down, and eventually the valley will sink if they're not taken out.

The kid is Nicholas's child aspect or something, and he vanishes at the border of the valley. Then Nicholas is almost lost there, as well, but he follows the same voices back he did the last time to find a bunch of talking flying reindeer who serve as the valley's guardians. They fill in the holes, and he realizes he's supposed to fly around the world delivering gifts.

Oh, remember the riddle? The answer is an apple cut in half, so the interior resembles a star. Doesn't make a damn bit of sense in context, either - I can only imagine the quantity of drugs the people who made this must have been on.

This is essentially a variation on L. Frank Baum's Life and Times of Santa Claus with all the interesting elements excised. The mythic elements are tuned back to low-magic fantasy, maybe in the hopes of making the story more palatable to older kids.

It's not as short a book as you might expect (or hope). There's an excruciating amount of detail about the residents of the valley, none of which serves much purpose. It's described so well, I almost feel like I've been to this mystical valley.

Mainly because I have. Literally. The acknowledgment section basically admits it's the Snoqualmie Valley, and according to one of the book's two Amazon reviews, it's based on people who live there. So, if you're from the area and remember what it was like in the 90's, this might make for an interesting read. For the other 99.999% of the planet, it does not.

But. The art is nice. This is a decent book to have around during the holidays to flip through and enjoy the paintings. Just don't bother reading it.

If you care, you can find used copies on Amazon going for $0.01, plus shipping. 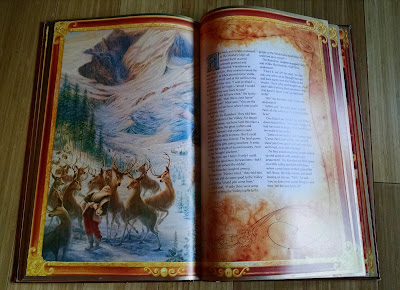