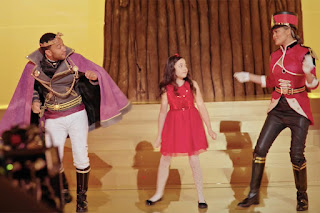 Depending on how generous you're feeling, The Toycracker can either be described as a live-action short film, an extended commercial, or the fourth seal of the apocalypse slowly peeling away to open the floodgates and usher in the end of days.

It's not exactly bad, per se; it's more that it's something that should not be. Its very existence is an affront to the world we know and the already fractured boundary between entertainment and advertisement. It's the final stage in the unnatural evolution that started decades ago when toy companies infected Saturday morning cartoons.

As the name sort of implies, The Toycracker is ostensibly a re-imagined Nutcracker. It starts out that way in a semi-clever scene where a modern Clara sings about losing WiFi on Christmas Eve to Waltz of the Flowers. Then she falls asleep and wakes in a version of the classic "giant Christmas tree" set, where she meets the Nutcracker, played by Chrissy Teigen, who starts singing a song about staying quiet set to the tune of Dance of the Sugarplum Fairly.

Just like in the original, she's joined by Rarity, Michelangelo, Barbie, Elmo, Superman, Troll dolls, Lego Batman, and EVERY OTHER FUCKING TOY TARGET'S MARKETING DEPARTMENT COULD CRAM INTO THIS SCENE. "Why do they need to be quiet?" you almost certainly aren't asking or caring about. Well, I'll tell you - they don't want to wake The Rat King.

Played here by John Legend, he shows up and challenges the Nutcracker to a rap battle with unspecified and presumably insignificant stakes. She loses because she can't find a rhyme for "purple," then Clara steps in and saves the day. There's a bit of Waltz of the Snowflakes mixed in - enjoy it while it lasts, because the remaining numbers drop Tchaikovsky altogether.

Defeated, the Rat King starts crying and goes into a musical monologue about how lonely he is, so Clara and the others - including Darth Vader, who shows up for some reason - convince him to celebrate with them. Then they sing a song about how more is better.

That's right: a bunch of toys start singing about how having MORE at Christmas makes for a better celebration.

Okay I'm calling the time: subtlety is officially dead. It will be missed.

As soon as they're done with all this, Clara remembers she has a family. Her new friends bring out the one thing that can take her home: a giant tablet computer. "Push the home button - it will take you back," Barbie helpfully chimes in.

You can't make this shit up. Unless you work in marketing, I mean.

The rest is by-the-numbers nonsense meant to imply some broader message about love, family, and friendship, despite the obvious fact it was at the tail end of an 8-minute paean to commercialism.

This is a tough thing to reflect on. The production values were impressive - the CG toys were done well, the actors did solid work, and (one assumes) the devil is pleased. It's hard to critique something so cynically soulless when clearly that was the intent. They set out to produce a short to drive home the message that parents need to buy more toys for their kids (and maybe an iPad, too, assuming they love them). This was successful. I guess you can't ask for more than that.

Not even for shame. God, I miss shame. We should really lay it to rest beside subtlety. I think they'd have wanted it that way.
2016 Advertisement Erin Snyder Fantasy Musical Short So Bad It's Good