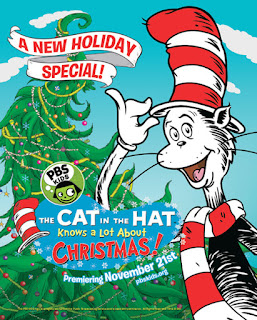 This is a special, double-length episode of a show I knew existed (as I often have a vague sense of programming affiliated with PBS) but had never seen. I had the impression it was educational. I’m not sure about that, but it is boring.

It starts off relatively inoffensive, if bland. Nick and Sally are two kids who are friends with the Cat in the Hat, and they arrive at his Christmas party and are promptly put to work as waiters while he sings about how awesome his party is. They think this is awesome. Kids at home: when doing favors for your “friend” is the super-fun part of your relationship, maybe rethink the friendship.

Anyway, all the guests are animals, and a bunch of them are introduced during the song and subsequent party games. These include an annoying young caribou/reindeer, a mouse, a crab, and a bunch of other animals in passing (I wasn’t paying close attention, it didn’t seem important). The guests leave, and the kids offer to help clean up, but the Cat sends them home because it’s Christmas Eve.

The Cat’s flying Thingamajigger drops off the kids, but while it’s stopped, the young reindeer (Ralph) jumps out as well, apparently mistaking a snowy suburban backyard for a frozen northern forest. He’s young and all, but this is when I started to think he might have some serious issues.

This happens ten minutes into an hour-long special, and is the first clue we had that there would actually be a plot.

Ralph has a few dull misadventures stumbling into Sally’s house, where Nick’s family is also visiting for the holiday. The grownups somehow miss the random wildlife, and the kids wonder how they’ll get him home.

The Cat shows up at this point to deliver presents, and offers to take Ralph. He invites the kids to come along, and they jump at it, promising Ralph to see him safely home. At this point both Erin and I sort of winced in confusion. The kids had just been singing two minutes ago how eager they were to be home for Christmas and how much they were worried about being late. The semi-responsible adult who was supposed to be responsible for getting the caribou home in the first place is there, the kids can safely and ethically walk away at this point.

But no, of course they all pile back in the Thingamajigger and sing some more. What follows is the bulk of the special: something goes wrong with the vehicle, they land, meet up with a local animal who attended the party earlier and their family and learn some random animal fact suitable for three-year-olds. The temporary problem is fixed and we rinse and repeat a few times with small variations.

Most of the problem solving is done by the kids (not that there’s much logic to it) and any tedious work is left to gibberish-speaking Thing 1 and Thing 2. Do they live in the trunk of the Thingamajigger? There is something unhealthy going on here.

The dubious educational value of this special is further undercut when Ralph finally gets home, only to be revealed to be a flying reindeer (of course). The kids then get home (apparently their parents aren't worried, even though they were told to be home by dinner and it’s almost time for bed) and there’s some more singing and a recap of the attempt at education.

I was a bit mollified to discover that despite airing on PBS, this is not a PBS production. I actually love good educational children’s programming, but this was just sad. From the title, I had been hoping for at least some kid friendly history of Christmas, or Christmas around the world. Instead I learned that elephants can smell water from “a long way away,” dolphins speak in whistles, and crabs...march to the beach for Christmas? That part didn’t make much sense.

Oh, and cats con other species into doing all the work. I guess that’s basically true.
2012 Edutainment Lindsay Special