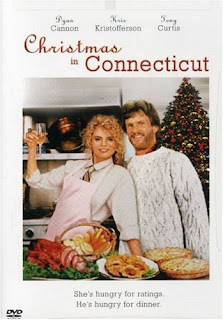 Arnold Schwarzenegger has starred in dozens of movies, he's been the governor of California, and he is one of the most iconic actors who has ever lived. But, in his entire career, he's only directed one movie: the 1992 made-for-TV remake of Christmas in Connecticut. And how is this film? Well, it feels like it's a made-for-TV movie directed by Arnold Schwarzenegger.

The story was updated to make Elizabeth a TV cook instead of a writer, and the titular Christmas in Connecticut a live televised event orchestrated by her manager. The other lead, played by Kris Kristofferson, is Jefferson, a Colorado Forrest Ranger whose log cabin burned down while he was rescuing a kid lost in a blizzard.

For reasons that are never adequately explained, the manager - who's standing in as Elizabeth's nonexistent husband - invites Jefferson to come early, so they can get to know him prior to the special. This is particularly confusing, as the manager's primary motivation is to cajole Elizabeth into sleeping with him.

It's much, much creepier than it sounds. For one, he's significantly older than she is, and his attempts to pressure her into bed are horrifically forceful. It comes across as if he's trying to manipulate her into a position where he can assault her. And, in case there was any doubt, these scenes are played for laughs.

None of this make sense, of course. Jefferson is there for the money - the network's promised him twenty-five thousand dollars if he'll do the special, so there's no logical reason to lie to him about the fact Elizabeth's TV persona is fictitious. Likewise, they "cast" non-actors for most of her family members in order to create more zany shenanigans. If the results had been funny, I'd be more willing to suspend my disbelief.

The only scene that had any laughs was the culmination of this madness, when Elizabeth decides to come clean on the air. It was still painful to watch, but they took everything just far enough to have a few jokes land.

Overall, it's an awful movie. Despite having worked with genius directors, it's clear Schwarzenegger has no idea what he's doing. There's no connective tissue or arc - it's basically a series of disjointed sequences that ends when the viewer's hour and a half sentence has been served. The characters' motivations are loosely concocted, and very little is believable. The movie works in homages to the original, of course, but these are pale imitations.

This a bizarre production whose very existence is hard to fathom. Why did Schwarzenegger think he could pull this off? Why was it produced in the first place? I didn't love the original Christmas in Connecticut, but it was a decent film. If they couldn't do it justice, they shouldn't have wasted everyone's time.
90's Comedy Erin Snyder Movie Sucks