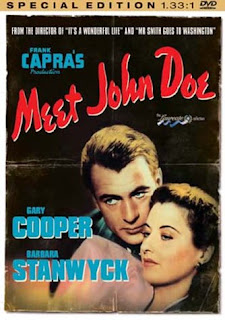 Even going by our standards, Meet John Doe qualifies as a Christmas movie on something of a technicality. Only the last few minutes actually occur around the holidays, and even then they're almost incidental. However, the movie goes out of its way to tie the season into its premise in order to build something of a heavy-handed metaphor.

I'll cut to the chase: Meet John Doe is a Christmas movie because "John Doe" is Jesus.

Well, sort of. It's slightly more complicated than that, but not as much as I'd have liked. The movie has a relatively strong opening, centering on Barbara Stanwyck's character, Ann. She plays a newspaper columnist who's just been laid off. As her final act, she writes a fake editorial letter written by an average Joe, who's fed up with the way "the little guy" is treated in society. The letter concludes with "Joe" vowing to jump off of City Hall on Christmas Eve.

The letter gets a huge amount of publicity. It also creates some problems for the newspaper, which is suddenly put in the position of having a lot of attention directed towards a fictitious celebrity. Rather than face the consequences of admitting they ran a fake letter, Ann convinces the paper to hire her back to keep up the facade. Realizing they'll need a face to accompany the words, they find an average man to pose for pictures and take credit. That's where Gary Cooper's John Willoughby comes in.

Initially, he's happy to have a little money, but as his popularity increases, he starts getting scared. Meanwhile, Ann's having issues of her own expanding a single angry letter into a fully-developed character. Taking inspiration from her father's diary, she shifts the message to one of hope and community, essentially a spin on "Love thy neighbor."

This exceedingly simplistic message takes off, leading to a nationwide movement of John Doe clubs, a concept encouraged by the shadowy media mogul who owns the paper. Eventually, he makes his move, commanding Ann to write a speech for John to be delivered at a national convention, in which he forms a third political party.

John hears about the plot and tries to fight back, only to be publicly disgraced by the media. He goes into hiding until Christmas Eve, when he appears on top of the City Hall building Ann's letter originally said he'd leap off of in protest. Ann shows up as well, along with a random assortment of other characters. They talk him down, pointing out he doesn't need to die for the John Does of the world, because someone already did that.

Jesus. They mean Jesus. Because it wasn't enough to imply a Christ metaphor the whole movie: they had to come out and say it. So everything's okay for some reason, and he leaves, presumably to marry Ann, build a coalition of John Does, and - I don't know - stage some kind of bloody revolution in which millions die needlessly.

I'm speculating about some of that - it's not entirely clear that he's going to marry Ann, though it is strongly implied.

If the synopsis felt bizarrely convoluted and directionless, then I've done at least a halfway decent job. The one-word description for this was "disappointing." There were several promising starts throughout the film that invariably just fell apart. The first was the most egregious: the opening implies the movie belongs to Ann, not John. She's a far more interesting character, and - for a few minutes, at least - is set up as a brilliant writer whose abilities might exceed her judgment.

But the story pivots to John far too quickly, and she's relegated to being a side character. Before long, she's reduced to the same mess of emotions and desires movies of this era regularly reduce women to. I'd hoped they'd do better with her, but no such luck.

There were quite a few other interesting plot threads that were cut before their time. Briefly, they toyed with the notion John was getting lost in his character, but this didn't really go anywhere. There was even a brief moment of magical realism in the form of a dream/vision, but... it kind of devolved into a monologue about spanking a grown woman.

The script felt like it was reworked a few too many times, which apparently is precisely what happened. The final result was one that started to ask some interesting questions, only to abandon them for cheap sentimentality and conventional romance. The decision to tack on a happy ending is a great example. I understand it from a business point of view, but it undermines what little premise the movie maintains.

All that said, there was some good character work by the leads and supporting cast, and quite a few jokes worked. Likewise, it was well made from a technical standpoint, but what else would you expect from Frank Capra?

The holiday elements were an unusual mix: they were ostensibly central to the movie's core, yet they were ultimately insignificant. Granted, John Doe represented a modern day Jesus, but - like so much of the movie - this never really paid off. Symbolically, Easter would have been a more appropriate choice.

I suppose it would be possible to argue that this was, on one level, about the birth of John Doe, in that he was more an idea than a man. And, lacking evidence to the contrary, you could even assume Ann's a virgin, tightening the connections more. But there's little reason to think the writers thought this through that far, and if they did the movie's resolution becomes a tad incestuous.

The brief resolution at Christmas Eve did a decent job playing up the alienation of the holidays, but obviously we've seen this done much, much better. Hell, Capra himself would return to the image of a suicidal man threatening to jump to his death on Christmas Eve a few years later in the far superior It's a Wonderful Life.