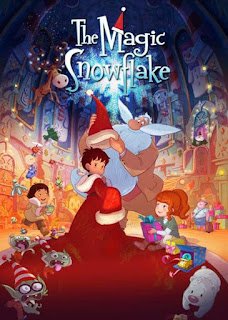 Depending on where you see this film listed, it might also be called "Santa's Apprentice: The Magic Snowflake," since it's a sequel to that film, a fact we didn't realize until after watching this. At the time, we assumed that was why we didn't understand what the hell was going on, but after seeing part one, I'm really no closer to understanding.

Maybe if I track down the animated series they're based on, it'll all make more sense. Eh. Probably not.

Like part one, the plot of this thing is an incoherent mess. Actually, compared to this incoherent mess, the plot of part one looks rational and considered. This opens by introducing a new character, a Intuit boy who delivers mail to the North Pole. He meets up with Beatrice, who I guess is living at the North Pole while the hours tick away towards her prophesied marriage to Nicholas.

The whole thing is really kind of creepy.

At any rate, it's against the rules for kids to be at the North Pole for some unspecified reason, which creates a bit of conflict. Nicholas, having just been handed Santa's mantle, over-reacts and tries to throw the kid out.

Meanwhile, the previous Santa starts his B-plot early, trying to get a job at the orphanage in Sydney where they picked up Nicholas. He doesn't make much of an impression on the hard-ass administrator who is inexplicably tasked with solely selecting his own replacement.

Nicholas, meanwhile, starts acting like something of a hard-ass himself. Oh, and he starts growing white whiskers, which apparently isn't normal for a twelve-year-old Santa. Beatrice then summons the Council of Santa Clauses to try and figure out what's wrong.

This is when things change course from stupid to so goddamn stupid I can't really begin to understand what the writers were thinking.

Nicholas has, and I really wish I was making this up, "grown-up-allosis", which is an astonishingly stupid way of saying he's growing up faster than he should. The newly retired Santa takes him on a brief journey to try and recover his innocence. That's when giant advent calendar doors start materializing in front of Nicholas, and he starts getting teleported through time to various Christmases past and future.

He needs to discover the spirit of Christmas, which is supposedly contained in his first gift, but is really the joy that gift inspired... you know where this is going. I should probably also mention the magic glowing Ursa Major spirit bear that helps him finish his journey after Santa gets sidetracked on a magical journey with the orphanage director.

Also of note is an earlier Santa Claus who comes out of retirement, ostensibly to help, but who nearly destroys Christmas and kills Nicholas. See, he's kind of insane, and he wants to give all the kids of the world bricks, because he doesn't understand video games, and... you know something? This really isn't as interesting as it sounds.

Well, I meant to mention all that crap. What does it say about a movie when you can provide a relatively complete synopsis without talking about the A-plot?

Overall, this was a lot like its predecessor. It'd be unfair to completely dismiss it as garbage due to a few interesting visuals and a few fun twists (the insane Victorian Santa, while not perfectly executed, had real potential). But it was mostly just a jumble of unfinished ideas tossed in at random. If the ideas had been better, it might have forgiven the slapdash nature of the thing, but as it is, it's really not worth your time.
2013 Adventure Comedy Erin Snyder Fantasy