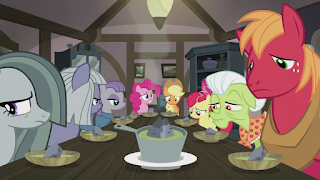 Whoo! Another holiday episode! (The first one was Hearth’s Warming Eve.) This is one of the first times (if not the first) we’ve seen a repeat of an ‘analogue’ holiday. Lots of shows set on Earth have a Christmas episode every year, but fantasy shows that make up their own stand-in holidays tend to just have one-off episodes.

Applejack and her family (Granny Smith, Big Macintosh, and Apple Bloom) have been invited to spend Hearth’s Warming Eve with Pinkie Pie and her family. Pinkie is sure it’s a match made in heaven, the Apples are excited and looking forward to the holiday, and everything is great… until they get there.

Even if you haven’t seen much MLP:FIM, you might know that Pinkie Pie is the zany, party-loving, occasionally-fourth-wall-breaking character. If you haven’t seen a few specific episodes, though, you might NOT know that she grew up on a rock farm, and her family is a bit eccentric, even by Ponyville standards. Her parents are basically Amish, and the whole clan is obsessed with rocks.

I love that we get another episode with Pinkie’s awesome sister Maud (she’s home from her doctorate program in rock science for the holiday), along with the first real appearance of her other sisters Marble and Limestone, and their parents Cloudy Quartz and Igneous Rock.

The problems start with the clash of traditions right away. The Apple family holiday sounds a lot like an old-fashioned Christmas, but for the Pie family, the ‘special Hearth’s Warming Eve dinner’ is stone soup. The dolls they set by the fire, rather than the heirloom plush the Apple family uses, are chipped out of stone. They do a scavenger hunt for the gift exchange, and don’t use any of the decorations that the Apples are used to.

Applejack, upset that everything is uncomfortable for her and her family, tries to give the Pies a “traditional” Hearth’s Warming Eve. But she damages a piece of their farm that looked pointless, but was actually a big part of their history, and generally makes the Pie family as uncomfortable as the Apples had been.

The Apple clan leaves under a cloud, but Applejack realizes how she’d missed what was interesting and important about the Pie family traditions because she'd been so hung up on the Apple traditions being ‘better’. She brings them all back to the Pie farm to help clean up and for another chance for both families to learn about each other on a more even footing.

It was a fun episode, and really heartwarming, as well as Hearth’s Warming.
2015 Comedy Episode Fantasy Lindsay