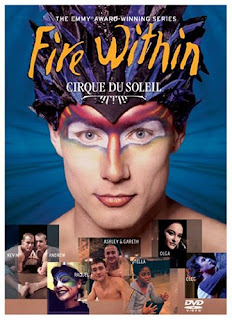 This was a Canadian reality television show about several Cirque du Soleil performers in Montreal. I expect the part of that sentence that leapt out at you was "Cirque du Soleil". Sadly, the part you should be focusing on is "Canadian reality television," which - judging by this - is roughly analogous to a PBS documentary about the production and distribution of toothpicks.

Perhaps this series would be better seen from the beginning. Or perhaps the Christmas episode was unusually dull. But, whatever the reason, this was far more boring than you'd imagine anything about people performing in a Cirque could possibly be.

By its nature, the plot was extremely thin. Several characters appeared, but I only recall two threads that could even generously be called "plots". To be fair, I could easily be forgetting something, as the episode has almost entirely faded from my mind in the five minutes that passed between watching it and writing this review.

First, there's a performer in England who's about to fly to Montreal to star in the show being profiled in this series. She's been living in London for years, and we are informed by her, by the narrator, and by her friends that she'll be missed. Also, she works on Christmas Eve. We don't really get much of a reaction on that, but it's stated, much as I just stated it's stated. But in more a hushed tone. As if it's important. More on the tone in a moment.

The other "plot" centers around one of the male performers whose girlfriend is flying into Montreal for the holidays. There's some time spent delving into his long-term plans, but nothing concrete is resolved. Note this isn't between the two of them but rather between him and the camera man.

Another scene has a cameraman - perhaps the same one, perhaps another - at a cast member's family Christmas dinner. He follows her into her bedroom while she takes a call, she tells him to leave (in a good-natured, but serious manner) and he playfully argues and tries asking her questions she won't answer.

So, I guess the cameramen are characters, too. Really obnoxious characters.

Like most reality television, this is more television than reality. There are sequences that are clearly staged, such as having a performer wake up, take a call in bed, and all the while there's a camera crew on the other end of the line to capture the rest of the conversation. It was something dramatic, too, about the performer's mother's health, but I find it difficult to accept any of what's being portrayed as real.

Likewise, there's a romantic scene in the back of a cab between a performer and his girlfriend. There are close up of them kissing and touching seductively that feel like they were pulled out of a cheap movie. It's obviously being staged for the camera, so what's the point? There's absolutely no illusion of reality in these moments, so I can't even begin to suspend my disbelief.

The voice-over comes off as pretentious and overly dramatic. Everything is portrayed with absolute seriousness in a hushed, concerned tone that would be more appropriate to the aforementioned toothpick commercial.

Adding to the pile of melodrama is the explanation that the performers can't afford to return to their families for the holiday. This, at least, I'll believe, but the show doesn't delve into the issue at all. If these people are being exploited by Cirque, that's worth knowing and potentially interesting television, but with the company involved in the production, it's no surprise they move over this quickly.

The holiday elements exist both as backdrops in the form of parties and as plot elements imposed on the piece by the narration. None of feels especially meaningful or impactful, though I suppose that's a consequence of the format.

Still, this lacks the energy you'd expect, especially given the subjects. Occasionally, we're treated to a few badly edited shots of performances or practices before the narration returns to the bored, exhausted stars.

Like I said before, there's a decent chance this was a bad episode of a good (or at least mediocre) series. But after sitting through a half-hour of that, I have no interest in finding out. Skip this - it's not worth your time.
00's Drama Erin Snyder Reality Sucks