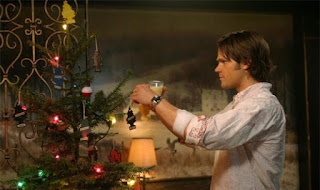 It's always awkward to jump into the middle of a plot-heavy series for a holiday installment. Supernatural is a long-running genre show with a pretty passionate fan base. This is the first time we've seen an episode.

This one's from the third season, and it's packaged as a full special, despite really only being an episode. The producers arranged to start with the old CBS "A Special Presentation" title card as an homage to holiday fare from the 80's. And, naturally, they end with snow falling.

There are a few story lines playing out simultaneously. A monster-of-the-week mystery forms the backbone, while a series of flashbacks to a Christmas Eve when Sam learned the truth about their family's legacy provides some heart.

The episode opens with another flashback, this one just a year prior, showing a man being pulled up the chimney on Christmas Eve while his son watched. A year later, and the situation is repeated in another state, but this time monster-hunting brothers Dean and Sam are present to investigate.

Sam starts building theories, originally wondering if the killer isn't Krampus or some other "anti-Claus" monster. They try a local Christmas theme park and follow a rude Santa home, mistaking him for a monster. After bursting through the door of his trailer, the two brothers found him alone. They started singing carols to explain the intrusion, allowing the producers to slip in yet another staple of holiday classics.

After that fiasco, another murder occurs and sets them on the right path. They discover a pattern: a wreath made from a very rare plant is present in each victim's home. Sam realizes it's used in pagan sacrifices and ties it back to pre-Christian solstice festivals, suggesting the killer is a pagan deity. The brothers are able to track these back to the source: an old couple who are a tad too wholesome to be believed.

Sam and Dean come back at night and break in. In the basement, they find the remains of the sacrifices. But before they can act, the pagan gods capture them. The brothers are taken upstairs and tied up for the ceremony. They're tortured while the couple offers a little backstory: these two are gods who assimilated over the millennia. They still take their sacrifices, but not in anywhere near the volume they once did: now, it's just a handful every year.

Sam and Dean are about to be killed and eaten when the gods are interrupted by a knock on the door - it's a neighbor dropping off fruitcake. This gives the brothers a chance to escape. They make it to the Christmas tree, break off branches, and use these to kill the gods.

Overall, this was good holiday fare, despite being a tad over complicated and under-explained. We're really not given enough of the gods' relationship to Christmas or Santa. The Wikipedia page implies this went through quite a few drafts and that earlier versions were leaning towards just using Krampus as the villain - that probably would have been cleaner. I don't mind surprises, but this felt like more a mangled explanation than a plot twist.

It's evident the producers approached this with lofty ambitions. If there was any doubt, the executive producer gave an interview before it aired where he called it "the most violent Christmas special in the history of television". I think that's a generous appraisal, though some moments in the torture sequence were pretty grisly for network TV.

While I don't think this was quite a dark or quite as groundbreaking as the producers believed it to be (nor quite as well researched - the pagan connections felt slapdash), it was a very enjoyable episode. The show's strength clearly lies in its lead characters, who are refreshingly blue collar (which is in itself rare for this genre). The episode - and I suspect the series - works because of their relationship and dynamic.

And even if it falls a little short of its creators' goals, they poured a lot of effort into including classic holiday elements, and that work shows in the final product. It's not perfect, but it's funny, twisted, and sweet... and it's probably even better if you watch this in the context of the series.
00's Episode Erin Snyder Fantasy Horror Mystery