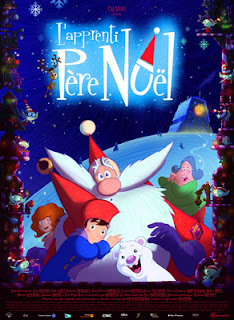 This is an animated French/Australian/Irish production that was produced (in part) by Cartoon Saloon, the company that made the brilliant, groundbreaking films The Secret of Kells and Song of the Sea. And if there's one thing I learned watching this, it's that not all of Cartoon Saloon's work is brilliant and/or groundbreaking.

This is actually based on an animated series called SantApprentice. I'm not entirely clear on whether this is a reboot or a prequel, since information on the forty-eight episode show seems hard to come by.

Either way, the premise is pretty old hat at this point: Santa's titles and responsibilities are passed down from one Saint Nicholas to the next. If this deviates from the norm, its in failing to offer a reason why. Typically, movies that go this route use provide the obvious explanation - that not even Santa can live forever. But that doesn't seem to be the case here - the previous incarnations are alive, relatively well, and make an appearance. More on that in a minute.

In its entirety, the plot is a jumbled mess. Characters are established in the opening minutes, pushed aside, then more or less forgotten until the end. I'll cover the story threads, but don't think you're getting any of this in order - that would take forever.

The main character, Nicholas, lives at an Australian orphanage, along with numerous other orphans, three of which I'll generously refer to as significant. First, there's his best friend, who's adopted at the start of the movie. Occasionally, the narrative flashes back to show how his new family's falling on hard times. They lose their house and have to move into a trailer on a bizarrely large plot of land. At the end of the movie, once he gains his Santa mantle, Nicholas give him a house, which....

There's magic and shit, and he gives the kid a house. Moving on.

The second significant kid is a new addition, a young girl named Beatrice. Funny side note - the movie very strongly implies she's betrothed to Nicholas by fate. They're twelve, I think. She writes some letters and, at the end, stows away on Santa's sleigh.

Next up is Nicholas. Not the protagonist, mind you: there's a second "Nicholas" in the orphanage, but this one is a jackass. When Santa goes to abduct collect Nicholas, his head goblin elf mistakenly offers the gig to the bully. Santa straightens it out, but not before the punk swears vengeance. This doesn't really amount to much until the end, when he gets Santa arrested, steals the magic ball, and shrinks all the orphans to the size of insects.

And, no - I'm not explaining any of that in more detail.

Besides, this is all B-plot. The A-plot centers around the current Santa's reluctance to take on an heir and Nicholas's difficulties stepping up. At first, the old Santa won't even consider retirement, but he's getting senile so his wife presses the issue. He summons the council of previous Santas who make him find a replacement. There are three criteria: the kid's got to be pure of heart, he must be an orphan, and his name must be Nicholas.

Unfortunately, we never get into the finer details of this. Such as, if you have an orphan who's pure of heart but his name isn't Nicholas, can you just have it legally changed? Or, if find someone named Nicholas who's pure of heart, can't you just kill his parents and make him an orphan?

Regardless, it turns out there's exactly one orphan named Nicholas who's pure of heart, and he lives in Australia. Sure. Why not?

Nicholas shows up on Christmas Eve and recruits him (we already went over the complications). Once at the workshop, issues arise. The kid's scared of heights, and there's an accident involving fireworks (Santa's full of crap - kids would have loved the explosives Nicholas invented).

Santa takes off but forgets the magic ball, so Nicholas goes to deliver it to him. Things go stupidly wrong, Santa winds up arrested for kidnapping Nicholas the year before, and the bully gets the magic ball. But Santa and Nicholas set everything right, and the movie can wrap.

I didn't even mentioned the stupid reindeer with Christmas lights in its antlers. Or the baby polar bear - for some reason, that thing's in every other shot. Oh, and Santa's elves all look like goblins: green little monsters. No clue what that's about.

Obviously, I wasn't enamored by this. That said, they deserve some credit for trying. In between the stupidity, they did attempt to build some emotion into the leads. Santa's struggle with aging, while not quite believable, was at least somewhat nuanced, as is Nicholas's frustration. In addition, there are moments when the skill of the animators shines through. But only moments. And don't expect anything a thousandth as touching as any second of Song of the Sea.

There are far worse things out there, but there's really no reason to put this on. There are better options for kids and adults streaming on Netflix.
2010 Comedy Dramedy Erin Snyder Fantasy Movie