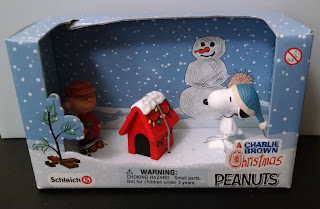 Schleich is probably best known as the main company that makes Smurf figurines, but they've also got a handful of other licenses, including Peanuts. I'm extremely torn on what to think of the company: on one hand, they produce high quality figures, but their prices feel somewhat extravagant in today's market.

This is as good an example as any. This set of three figures (or two figures and a doghouse accessory, depending on how you want to look at it) started out at $20. Given that these are about two inches tall, $6.50+ feels a little excessive for a figure that small. Hell, I picked up similar toys in minimalist packaging a few years ago for just $3 each. Of course, those weren't made by Schleich. 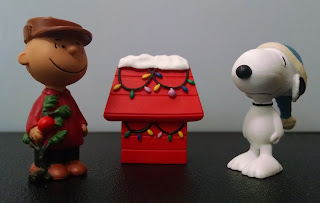 The main thing you're paying for here is the brand name and quality it implies. And, for what it's worth, these are pretty high-quality figures. The packaging assures us they're appropriate for kids over 3, which implies a level of faith in their construction.

That said, anyone who's every seen a Schleich figure that's been played with for any amount of time knows these can pick up battle scars (as can all toys, really). They're sturdy, but they're not indestructible, which makes me question the wisdom of buying them in the first place. There are, after all, much cheaper options for Peanuts toys, if you're not too concerned with their ability to withstand kids. 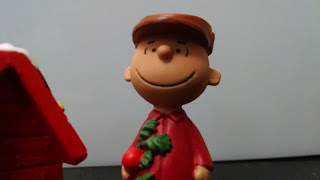 But don't these look better? Well, yes and no: from one angle, they're superior to most of Schleich's competition. But not exceptionally so. Here's a picture of a Snoopy produced as a movie tie-in, alongside the one from this set: 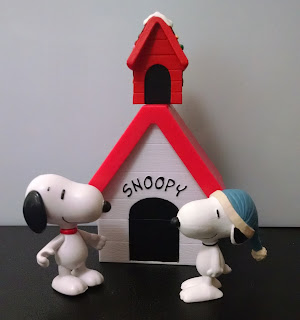 The one on the left (i.e.: the one not wearing a hat) is the cheaper movie one, and his far larger dog house is holding up the one from this set. The Schleich figure is definitely nicer (not to mention sturdier), but the cheaper one came with the massive house, Woodstock in a nest, and a bowl full of bones for something like $6... less than a third what this set ran.

And there's more. Flip the Schleich figures over, and you're treated to raised text providing details on the figures and their origins. I'm a strong believer this stuff needs to be better hidden than this. 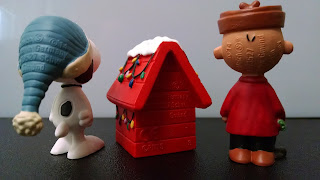 We're not done yet, either: let's talk scale and design. Individually, these look fine (from the front, at least), but they're not remotely in scale with each other. Specifically, Snoopy is about 30% larger than he should be, relative to Charlie Brown. The doghouse is arguably about right compared to Chuck - it changes size (and color) in the special, but at least one image matches up pretty close.

Likewise, the figures aren't quite screen accurate in their depictions. To be fair, I'm about to nitpick, but I feel like the price point and style justify that.

The outfit on Charlie Brown is correct, or at least close enough to make me happy. The tree he's holding has an error, though. Specifically, the ornament shouldn't be present. Again, I realize this is pretty insignificant, but it bothers me. In the special, Charlie Brown had already set down the Christmas tree when he placed the ornament on it, at which point it drooped over, causing him to lose hope. Showing him clutching the tree with the ornament messes up this fairly iconic moment. Again, it's minor, but it feels like the kind of thing that should be exact. 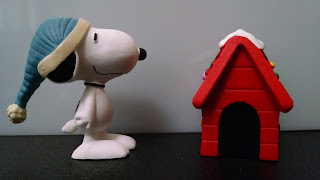 Snoopy's hat is a bit weird, too. I don't believe he ever wore it in the special, though I've seen it on art connected to it. Sure, there's an argument that art is what these toys are trying to recreate, but if so they should have had the tree separate and corrected the decorations on Snoopy's house - at the end, it contained far more lights and ornaments, due to his contest victory.

And again, there's that scale thing. He's way too big.

These are minor issues that don't impact the value of the individual figures, only the set as a whole. But given the price point on this, shouldn't we expect them to get these details right?

Of course, I didn't pay the full $20 - I waited until these were clearanced for $7 and picked one up. At at little more than $2 each, I can stomach the imperfections. But maybe if they'd done a better job, this wouldn't have lingered in the clearance rack so long. 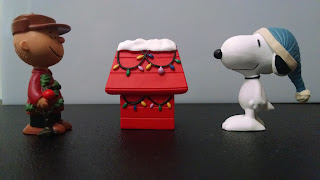