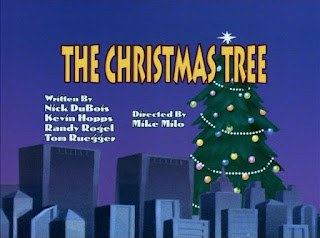 "The Christmas Tree" opened the third-to-last episode of the series. They tacked on the holiday opening, featuring snow over the credits, too, before starting the story. It doesn't run the full thirty minutes, but it takes up about 2/3rds of the half hour slot.

The other shorts included a Katie KaBoom bit about her negotiating the rules for going to the prom and a Deadline short built around Chicken Boo. The Deadline bit was fun, if a bit repetitive, but I've never really been a fan of the Katie KaBoom shorts. But neither of these are Christmas themed, so I've got nothing more to say about them.

Back to "The Christmas Tree." The story opens in a snowy forest with a giant pine tree being cut down by lumberjacks. There's a touch of toonish absurdity to the whole thing, but there's also a bit of sincerity in the holiday music and the expressions on the lumberjacks' faces. They hop in their truck and drive off, heading for New York, where...

...Actually, let's pause a minute. Animaniacs has done some great holiday bits over the years, but I'm pretty sure this is my favorite, barring the musical parodies. Unlike the musical parodies, this really makes use of some clever plot twists, so if you like the Animaniacs but have never seen this one before, maybe it's a good time to apply the breaks. Go find it streaming somewhere, watch, and come back. Or, you know, ignore this warning and get spoiled. Your call. 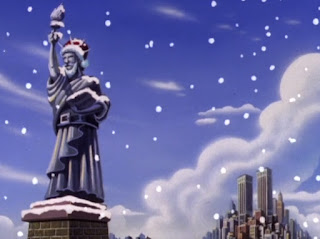 After a blink-and-you'll-miss-it sight gag where the Statue of Liberty is shown with a Santa-make-over, the tree goes up in  Rockefeller Center  Rocky Fellow Center (yeah, I didn't think that one was funny, either).

The decorations go up, carolers start singing, and the news covers the annual lighting ceremony.

Just about the time we were trying to figure out where this was going, the camera zoomed in on the tree to review a window. Inside, still in bed, is the protagonist of this particular story: Slappy Squirrel.

Slappy, if you need a refresher, is the bitter, elderly Hollywood cartoon star who's through taking anyone's crap. She's one of the show's more consistently funny characters. 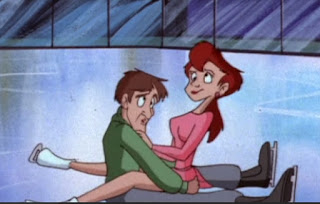 Having slept through her tree being cut down and relocated, Slappy is initially woken by her alarm clock. It's snack time, and she wants to grab a handful of the nuts she hid for the winter.

She actually doesn't realize she's not in her forest yet. Instead, she wanders out in a stupor and causes a great deal of property damage Also, she gives the animators a chance to sneak some suggestive visuals past the censors (see the picture on the right - I'm sure the posing was accidental).

When she gets back her nephew, Skippy, wakes up complaining that he can't get any sleep due to the noise and light. Slappy declares a one-squirrel war on Christmas in New York, still without realizing she's in New York.

The city fights back, first with animal control, then with something far more sinister: lawyers. Eventually, Slappy learns what's happened and comes up with a solution: they return her tree to the forest, and everyone can be happy. When the CEO at Rocky Fellow Center refuses, she airlifts his house into the middle of Times Square to teach him better.

He surrenders, and she makes a deal so her tree gets returned, but the Center gets a replacement: the WB water tower. The episode closes with the Warners poking their heads out to complain about the noise and lights.

It's hard to say for certain, but I'm pretty sure this is my favorite Slappy the Squirrel bit. I also love the twist - they left her off the opening title card and skipped her theme song, so you don't know she's starring until she shows up a few minutes in. The jokes, both visual and script-based, are hilarious throughout. Meanwhile, the holiday elements permeate the setting and music and contrast well with Slappy's unapologetically violent nature.

I hope you took my advice and tracked this down before (or even instead of) reading this review. If you didn't, there are still enough great moments to justify watching it, even knowing where it's going.

As of posting, Animaniacs is streaming on Netflix.
90's Comedy Episode Highly Recommended