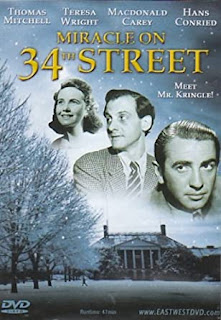 First off, whatever version of Miracle on 34th Street you think this is, you're almost certainly mistaken. This isn't the 1947 classic, nor is it the sickeningly melodramatic 90's remake. In fact, it's not really a movie at all, at least not in any sense I'd use the word. No, this was a TV special attempting to remake the original movie at a breakneck pace to fit neatly into an hour timeslot. That's an hour with commercials - the special itself is around 45 minutes.
What's odd about this is that, with a couple exceptions, the parts that aren't cut for time are nearly a word-for-word copy of the original. Hell, the leads even appear to be mimicking the original actors, albeit at a faster clip. Think understudies in a stage play filling in.
Since we're more or less using a pared down version of the '47 script, the plot is virtually identical. Kris takes a job as a Macy's Santa (though the scene with the drunken Santa he's hired to replace is cut entirely), he starts a trend of sending shoppers to competing stores when necessary, he's nearly fired when Doris (his boss) realizes he thinks he's actually Santa, he gets arrested after assaulting Macy's company psychologist, then he has to prove he's Santa in court. And of course the whole thing with Doris, her skeptical daughter Susan, and her neighbor Fred, is intact, as is the ending when Kris brings the couple together and delivers them to the house Susan wanted for Christmas.
Aside from the cuts (more on those in a moment), there were two notable deviations from the original. First, the sequence where Kris strikes the psychologist is completely new. Now it takes place at a school event where the psychologist is delivering a prepared lecture on the evils of the Santa myth. Kris essentially butts in, then attacks when the psychologist says something he considers over the line. It's a baffling choice, since Kris kind of comes off as the bad guy here. Sure, the psychologist is an ass, but he's speaking at an event he was invited to and Kris wasn't. Then Kris assaults him - fairly violently, too - in front of a group of children. Subsequent scenes don't portray this any differently than the earlier film, so it really doesn't work.
The other change comes at the end. Instead of the post office employees coming up with the idea to send the letters to Santa, the solution is Doris's idea, which... honestly, really helps solidify her arc and give her something to do in the third act. I think it takes a bit away from the story (I think part of the genius of the original is that there's no architect or really even goodwill driving Kris's victory), but letting Doris be the hero might be worth the sacrifice, particularly considering how rare that is in movies of this era.
The real issue with this special, of course, is the pacing. Pulling this off in an hour meant cutting a number of character moments, and you feel their absence. On top of that, the actors have to speak abnormally fast to fit their lines into the allotted time.
That said, this is still solid. The cast is good - not as good as in the original, obviously, but that'd be a hell of a bar to clear. And it's always nice to be reminded just how good the original's dialogue is - even when the pacing impacts delivery, the writing is as fantastic as ever.
Obviously, a close remake just eight years after the original has limited value. I wouldn't recommend this for the simple reason the 1947 version is easy to track down and significantly better. But as a weird artifact from an era where redoing a recent movie for television was an idea that made sense, this is about as good as you could hope for.
And just in case it doesn't go without saying, this is infinitely better than the abysmal 1994 movie. Another positive that comes out of recycling the script is you're almost guaranteed not to entirely miss the point.
50's Comedy Erin Snyder Fantasy Special