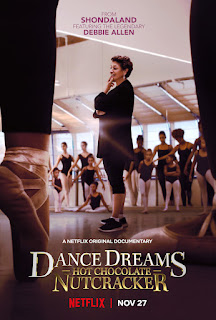 We've watched a lot of Nutcrackers over the years, but nothing like Debbie Allen's Hot Chocolate Nutcracker.

Created as a showcase and fundraiser for the Debbie Allen Dance Academy (DADA), the Hot Chocolate Nutcracker appears to follow the rough outlines of the traditional ballet (girl gets toy at party, toy breaks, magic happens, crazy tour through fantastical realms), but replaces the standard dance and music with dialogue, comedy, and a vast and ever-evolving variety of musical and dance styles.

I say "appears to" because this documentary follows the rehearsal and backstage information about the show. It's not a recording of a full performance, so we only get to see snippets.

Interspersed with clips of rehearsal and interviews with young performers, we also get basic background on Allen's career, the founding of DADA, and some of the ongoing barriers facing Black dancers, particularly in ballet.

I felt the film was fairly well-balanced between showing the kids' hard work and skill as inspirational while also showing how difficult it is to be in a show of this scale. The teachers are hard on the kids to a point that might be surprising to some. (This former theater kid just shrugged it off because it seemed accurate.) Could it have gone further in addressing either the difficulty in making any kind of living in the dance world or the fact that DADA's scholarship program makes it such an outlier? Sure, but those topics were at least present, which is nice to see in what could have just been a feel-good puff piece.

The Christmas content in this movie was naturally confined to the performance content itself, which includes holiday songs, the requisite holiday party, and a candy-cane-themed hip-hop number. There was some discussion early on about just how many Nutcracker performances go on in the USA (in non-pandemic times) and how it's practically a tradition to use such an event to prop up the finances of a dance company for the rest of the year.

That brings me to one of the few things that was uncomfortable for us. The movie was released on Netflix in 2020, but I haven't been able to find out when it was filmed. It has to have been before 2019, because we're given some information about what some of the teenagers profiled in the movie did with the next year or so (join prestigious dance companies, get into college, etc.) But now in 2021, we have to look back at shuttered performance venues across the world, and wonder what happened to this generation of kids who wanted to make it in the arts?

From some quick Google research, it looks like DADA has weathered the storm so far. Hopefully documentaries like this one will continue to inspire more art. The world has enough traditional Nutcrackers already.