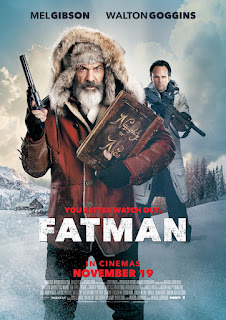 I held off on this one when it came out last year, because I didn't want to contribute anything towards salvaging Mel Gibson's career. He's had more chances than damn near anyone, and he doesn't deserve another. At the same, this is a bizarre spin on Santa, so I felt like I had to get to it eventually. And of course, I was incredibly curious.

If you missed the trailers, Fatman is a dark comedy-action-drama-superhero movie about an aging Santa and Mrs. Claus trying to keep their Alaskan factory afloat through difficult times, and also Santa's being hunted by a sociopathic hitman hired by a kid seeking revenge over a lump of coal.

The problem for me is the movie works so hard doing all that competently, it doesn't actually get around to justifying the premise in the first place. In other words, this movie is fine but ultimately forgettable, which is kind of a major failing in a premise that bananas.

It doesn't help that Fatman quite literally has two separate plots, each of which could (and maybe should) have been a separate film. Santa has an entire arc built around his sense of disillusionment with the world, his financial problems, and a reluctant partnership with the US Military, who enlists his factory and elf workers to make computer chips for fighter jets. This is essentially a satire that resolves with Santa's faith in his work and himself renewed when his wife reminds him of the good they do in the world.

All that's wrapped up before the assassin who's spent the entire movie tracking him down attacks. I should mention the assassin has his own reasons for wanting to kill Santa (same generic ones you'd expect), so the existence of a kid supervillain is ultimately superfluous. Ostensibly, the kid was financing the killer, but it didn't seem like it was all that expensive, particularly since the assassin seemed to be financially secure. I found it odd they didn't have the kid contribute by using his resources or intelligence to figure out where Santa was located - it feels like an oversight.

At any rate, the assassin shows up and kills all the military personnel, making me wonder if that entire subplot was added to ensure there'd be a supply of expendable characters. He tussles with the elves, though it's unclear how many (if any) of Santa's helpers meet their end. He also blows up Santa's workshops, before facing off against the titular Fatman himself.

I should probably have mentioned the movie's already gone through the trouble of establishing Gibson's Claus is an expert marksman, has low-level superhuman strength, and has at least some sort of accelerated healing. Granted, the assassin's armed for war, so it's something of a level playing field. They both get wounded, but Santa wins the upper hand. He stops short of killing the assassin, which winds up being a mistake: he gets stabbed through the back then shot in the head.

Mrs. Claus kills the assassin then discovers her husband, while badly wounded, isn't dead. We next see the two of them pay a visit to the kid who put up the cash. In a nod to Odin, Santa now has one eye. He terrifies the kid and makes it clear he'll be back if the boy doesn't change his ways, then returns with his wife to the remnants of his home and prepares to rebuild.

The half about Santa dealing with the modern world is, by most technical metrics, probably better. There's a better arc, and at least an attempt at saying something about the holidays in a nation fixated on consumerism. But let's not kid ourselves: no one's watching this movie for a drama/satire.

No, this was sold on the merits of the big finale, which comes about as close to turning the fake movie teased in Scrooged into an actual film as anything I've seen. Granted, this is still somewhat restrained, at least as far as Santa's involvement is concerned. The big battle sequence happens without his knowledge - he only shows up for the final showdown.

And the showdown is pretty good. It's tense and surprising, particularly during the fake-out. The existence of the movie is bizarre enough to leave you genuinely uncertain where they're going to draw the line or what point they're trying to make, so while I was never convinced Santa wasn't coming back, I also thought it was a real possibility they'd kill off the character in some sort of ode to nihilism.

Although the scene is good, I don't think it's anywhere near enough to recommend the movie, which unfortunately begs the question, "what is?" And the answer I'm left with is "not much." Again, this isn't a bad movie, but an intriguing premise isn't the same thing as a satisfying movie, and this felt like it was missing something.

The easiest fix would have been to give this a point. That's not to say the movie doesn't have themes, just that they're muddled and underdeveloped. The politics are all over the place - sometimes libertarian, other times socialist.

You can get away with mixed messages in a movie that's genuinely engrossing, hilariously funny, or thrillingly violent, but this was just kind of mediocre. It needed to say something meaningful; it absolutely did not.

I will say, somewhat begrudgingly, that Gibson is fantastic in the role. I'm not happy he's still got a career, but there's no denying the guy's good at this, and - as weird as it might sound - an angry Santa Claus is well suited to his strengths. I was likewise impressed with the other major characters. Walton Goggins is fantastic as the assassin, and Marianne Jean-Baptiste is perfect as Mrs. Cringle.

The holiday elements are obvious, though it's worth noting the majority of the movie is set in the months after Christmas. As far as this Santa's concerned, I'm always willing to indulge versions who grow cynical without losing the core of the character. And I think that's worth acknowledging: as dark and meanspirited as this movie and Chris Cringle get, there's still a core of wanting to inspire children. Gibson is still playing a recognizable version of Claus.

That said, I feel like the movie doesn't do enough with the character to give his story depth. I absolutely appreciated the Odin reference, but on its own, that's all it really felt like: a reference. The script boxed him into a very narrow range, so we weren't shown enough aspects of the character to give that moment weight.

This movie was fine. There's a lot to like here, including several inspired sequences I didn't talk about, but as a whole, I was a bit disappointed. With a concept so far outside the normal holiday fare, you want the movie equally unique. Instead, this wound up feeling oddly conventional.