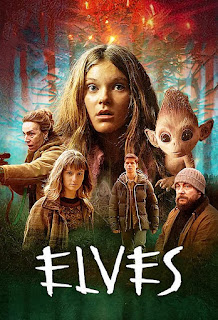 Nisser is a Danish TV series, just six half-hour episodes long, released as "Elves" in the US. It looks and feels a lot like Stranger Things, both in terms of tone and content, which is both a recommendation and a warning not to watch this with young children (teenagers used to horror should be alright, though - this is scary, not terrifying). The premise is rooted in European folklore and tradition, and while the creatures here have been updated with a modern aesthetic, their portrayal isn't entirely subversive. Traditionally, nisser aren't typically this scary or monstrous, but the older stories about them tend to get dark. I'm going to have a lot - and I mean A LOT to say about this, as well as the US title, but I'll save that for the end, so readers bored by the nerdy stuff have the option of checking out.

First, a spoiler warning. This isn't one of the cases where the impact depends on some kind of major twist, but I'll be going over the plot in a moment, so if you're planning to watch this, doing so first would probably be a good idea. And, to be clear, I absolutely endorse seeing this. Nisser is a well-made, fun, creepy Christmas series that blends traditional folklore with modern scares and designs. It's great. I do, however, recommend you skim the Wikipedia article on nisse before starting - you'll get more out of this if you understand what a nisse is (hint: not an elf).

Skip over the intros and credits, and this should run less than two and a half hours if viewed in a single sitting. And, honestly, that's probably the best way to approach this: the first half is good, but it's a bit of a slow burn until episode three. This is a good series to binge, provided you've got a few hours.

The story centers around two groups of characters: a family visiting a rural island to celebrate Christmas, and the locals harboring a dark secret. The first episode opens with one of those locals (we later learn his name is Møller) chaining a cow to a pole in the forest as a sacrifice. We don't see what comes for the creature, but its fate is pretty clear.

Next, we meet the family of four. The most significant of them (and really the main character of the series) is Josefine. Her age is a bit ambiguous (it feels like she was written younger than the actress, which gets a bit awkward at times), but she's obsessed with animals, and she feels smothered by her parents (particularly her mother) treating her like a child. While driving across the island, they hit something on a dirt road in front of a massive electric fence. They get out and investigate, but can't find anything, though Josefine is convinced they injured an animal. During this, Møller drives up and demands they move on, which they do.

Still worried, Josefine sneaks out that night and finds the creature they hit in a field. It is, of course, a nisse. I should note the design is of a fundamentally feral creature, albeit with a roughly humanoid body. It has a pointed head and hair on its face in order to evoke the pointed hat and beard of traditional nisser.

This one is a baby, and as such is fairly cute. Josefine hides it in a shed behind the cabin her family is staying in and nurses it back to health. She soon enlists the help of her older brother. Aside from the family and Møller, the other significant characters are an old woman named Karen and her granddaughter, Liv, whose parents were killed by the nisser years before at a now-abandoned mill. Karen is the de facto leader on the island, while Liv wants to see the rest of the world (or at the very least the mainland).

Turns out taking the baby has consequences. When one of the locals goes to sacrifice another cow, the nisser take him instead and toss his head over the fence. Karen distracts the family by inviting them to tea while Møller goes to the cabin to find the infant nisse. By this time, Josefine catches up with him, though he pushes her out of the way, grabs the young creature, and returns it to the forest. What he doesn't realize is Josefine follows him here, as well, and sneaks in while the door's open. He leaves, shutting her in.

We're up to episode four now, incidentally, a great deal of which centers on Josefine searching for the baby in the nisser habitat while her parents, still oblivious to what's actually going on, search for her. They figure it out and have a brief confrontation with Møller, who pulls a gun in an attempt to stop them from getting into the woods. This goes pretty badly for everyone - the gun goes off, damaging the electrical equipment maintaining the fence.

By this time Josefine's adventures have taken a dark turn. One of the adult nisse nearly got her while she was in the aforementioned abandoned mill. She escaped after turning on a saw and partially decapitating the monster. After that, she locates the baby, who leads her towards the entrance.

Josefine's mother manages to get inside and locate her and the baby. She scares off the creature and pulls her daughter out. By now, it's clear the broken fence is at best a deterrent, and the monsters are going to escape.

The fifth episode concerns the various characters - now more or less united - coming together and trying to survive, warn anyone in harm's way, and fix the fence. This teamwork is somewhat short-lived: when Karen learns that Josefine killed one of the older creatures, she tricks the girl into coming with her, drugs her, and chains her to the post from the beginning.

To their credit, neither Møller nor Liv are onboard with this, and they help Josefine's parents get in to rescue her, which they manage to do a little too easily for my tastes. To be fair, it's not that easy, but in the scheme of things, everyone gets away without paying too high a price. Well, almost everyone - Karen winds up learning the hard way that the nisser weren't as laser-focused on going after Josefine as she assumed. That's tough on Liv, but probably not that tough - Karen nearly shot her to keep her from helping Josefine escape.

In the end, everyone leaves the island except Møller, who remains to restore the balance with the nisser. We also get a shot of the underside of the family's car showing the baby nisse hiding there. I guess that's kind of ominous, but in most legends these things live in and look after homes, so it'll probably be fine, as long as they don't forget the pat of butter (look it up).

That's kind of a barebones synopsis - I'm glossing over a lot of good and bad stuff - but I think you get the idea.

I do want to note the show does a great job portraying the locals as unusually complicated. With the exception of Karen, everyone else comes off as sympathetic, if flawed. They view the nisser as sacred, and for good reason. Whatever else the creatures may be, they're a part of the region. The locals feel responsible for preserving them.

You can watch the show and point out moments where disaster could have been averted if Møller or Karen had perhaps lied better or just shared more information, but it's not because the writing is bad - the characters are supposed to be bad at communicating with outsiders. That's the point. They're stuck in their ways.

The character where this does fall apart a bit is Josefine, whose actions and decisions don't quite add up. She's written as clever and effective while hiding the creature, but absurdly stupid when faced with danger. At no point does she stop trying to bring the creature out of the habitat, and we're not really given a compelling explanation why (she says it's because she thinks it should be free, but it's a pretty big forest, fence or no). This becomes grating after a while, but she's a kind enough person and the actress is good enough it wasn't a huge issue.

The real strength of the show shines in the scarier moments, particularly when Josefine is alone in the woods. Some great sound design and a less-is-more approach to showing the full-grown creatures creates some genuinely unsettling moments.

I will note that the adult creatures, while retaining pointed heads, really feel less like nisser than generic horror monsters. Through a lot of this, they could really have been xenomorphs or any one of a dozen other creatures. Personally, I'd have preferred it if they'd kept a few more aspects of the originals.

As far as themes go, I'm at a bit of a loss. This is definitely saying something about the relationship between rural and urban culture, as well as the tension between retaining folklore and celebrating the ways it changes. What, precisely, it's saying about those topics is likely connected to regional issues I lack a background in. That's the price of watching things made in different cultures.

Speaking of which, I do have some thoughts on the English title and aspects of the translation, because I think Netflix is doing a huge disservice to its viewers.

Nisser are a major part of Scandinavian folklore. They're associated with Christmas, though not exclusively, and they're far closer to what we'd consider gnomes than elves. Historically, they're also sometimes translated as "goblins," which is a good match for how they're depicted here. Unless I miss my guess, Netflix went with "Elves" in order to both highlight and capitalize on the Christmas connection. And, to be clear, nisser are absolutely a Christmas tradition, so in a way, this translation conveys a core aspect of the premise any other translation would leave out. The problem is more that what's missing may lead to some confusion over what this series is about and why its tone is what it is. I'm seeing several articles and discussions treating Nisser's premise like it's some sort of subversive joke, and I don't believe that's accurate. Like most yuletide myths, stories about the creatures this is based on have sort of shifted over the years. Now, they're often interchangeable with Santa and his elves (there's a nisse ornament in the movie that gets translated into "Fat Santa" in an attempt to gloss over a lot of history and lore). But earlier stories involving nisse portray them as potentially dangerous beings, particularly when angered. In that context, this series is exploring the darker past of a mythic creature that's come to be depicted as cute and friendly. It's essentially taking a cute Christmas tradition back to its roots, but to really understand this, you need to know those roots exist.

By translating all of that into "Elves," a great deal of depth is lost - you'd be forgiven for thinking this was a Christmas horror/comedy in the vein of Jack Frost, as opposed to a horror series built on traditions and myths going back centuries. That's not to say the show doesn't have a sense of humor - it absolutely does - but that's not the primary tone or the point.

I really wish they'd just left the title Nisser, or at the very least referred to them as such in the translation. I know that probably wouldn't have been the best marketing move, but this show is better in context than warped into something it's not.