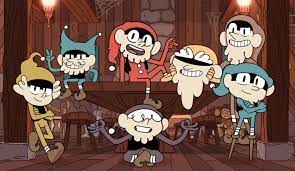 Hilda is an animated Netflix series adapted from a series of graphic novels inspired by Scandinavian folklore. The art style mimics the feel of the comics it's based on, building a world that honestly looks like drawn pictures come alive. Depending on the episode, you might end up seeing something wacky and fun, magical and awe-inspiring, or even a little dark and unnerving. It's an absolutely phenomenal show, beautifully written and animated, and we recommend you watch it at once.

Which of course poses a bit of a problem. The holiday episode I'm about to discuss is towards the end of the second season, so while I absolutely recommend it, I'd suggest watching the rest of the series first. This isn't so steeped in continuity that you'll be spoiled or confused: it's just better in context.

The main character of the series, unsurprisingly, is Hilda, an adventurous preteen girl who moves to Trolberg, a cross between a modern city and a walled medieval village. The show focuses both on her adventures and her relationships with her mother and friends. The adventures tend to echo themes of ecological sustainability and cultural understanding, while the relationships are nuanced and honest. Like I said: this is good stuff.

This episode, set around an unspecified "Winter Festival," starts with Hilda and her friends meeting the Yule Lads, here presented as a group of somewhat mischievous elfin characters obsessed with finding naughty children. Hilda invites them to the Winter Festival and absent-mindedly mentions some rival kids qualify as naughty. She also inadvertently vents about her mother's apparent hypocrisy around a minor issue she'd scolded Hilda about. This intrigues the Yule Lads immensely, who remark they'd never realized adults could be naughty, too.

By the time Hilda realizes why the Yule Lads are so interested in locating naughty individuals, they've already kidnapped the neighbors and Hilda's mother and are planning to give them to their own mother, the ogre Gryla, to turn into stew.

So, yeah, that got dark fast.

Hilda confronts The Yule Lads, who aren't actually evil - they're scared. Their mother caught each of them doing something she deemed naughty and planned to cook them into a stew as punishment. Hilda and her friends suggest a solution: they'll share their recipe for an alternative meal - vegetable broth - in exchange for the release of the Yule Lads' captives. The episode ends with Hilda and her somewhat confused mother reunited at the festival.

I know it doesn't come through in the synopsis, but the episode walks a tightrope between a fairytale situation and emotional depth. This is common for the series, which finds ways of exploring different points of view, so you understand why each character makes the choices they make. There's a disconnect between Hilda and her mother that creates tension, but - unlike most kid's shows that touch on that idea - it's really not something that could be solved with better communication alone.

Tonally, this episode feels a touch lighter than average, despite the murderous ogre. It's still tense, funny, and above all charming. In addition, the leader of the Yule Lads is voiced by Andy Serkis, so that makes for a fun bit of trivia.

As mentioned above, this isn't technically a "Christmas" episode, but rather a Solstice one. As a yuletide nerd, it's nice to see the Yule Lads show up in something (nice change of pace from all the Krampus we've been getting). I also like that we're getting something a little different than the typical Christmas special: sure, they still end up celebrating around a tree, but the tone, themes, and story all stay true to folklore, rather than conforming to one of the usual templates.

There's not a lot I have left to say. Once again, this series is wonderful. If you're a fan of fantasy, animation, or... I don't know... things that are good, I recommend it unconditionally.