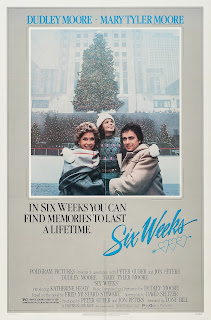 It's rare to come across something that tries this hard and misses so spectacularly. Six Weeks is a 1982 drama about a man running for Congress who forms a deep emotional connection with a precocious, talented 12-year-old girl dying of cancer and her wealthy mother. So... not a premise you want to screw up.

The movie stars Dudley Moore as Patrick, the Congressional candidate, and Mary Tyler Moore as Charlotte, the mother. Nicole, the dying kid, is played by Katherine Healy. Katherine and Dudley do good work. As for Mary Tyler Moore... let's just say she EARNS her Razzie nomination.

The plot is thin, which isn't in itself a bad thing, since this is really supposed to be more about tone than story. Unfortunately, it screws that up, but I'm getting ahead of myself. Let's expand on the premise.

Nicole's a talented dancer who dreams of performing in the Nutcracker, but she worries how her mother will react to her death. She also wants to know what it's like to have a father.

In addition to running for office, Patrick is married and had a son, facts which complicate Nicole's desire to hook him up with Charlotte. As awkward as you're probably imagining this is, I assure you the reality is far, far worse.

Oddly enough, none of this negatively impacts his campaign. You keep expecting the affair to become public and have some consequences, but... nope. They could have done this as a story where Patrick has to choose between his ambitions and his heart, but it just doesn't go there.

Patrick's entire campaign feels more like background noise than anything relevant. It's ostensibly significant that Nicole believes in him and wants him to win, but we never learn what exactly Patrick believes in or what he supports. The whole thing feels extraneous: there's no real reason for him to be running for office, so why include it?

The last third of the movie is set at the holidays. Charlotte takes Nicole to New York for Christmas and Patrick abandons his family and campaign to go with them. There are carriage rides in Central Park, decorations, and all that, culminating in Patrick pulling some strings to get Nicole a late audition for the Nutcracker (side note: Katherine Healy was and still is a professional dancer). She gets to fulfill that lifelong ambition, even performing in a dress rehearsal, then promptly dies on the subway ride back to the hotel.

The movie ends with Patrick writing to Charlotte to let her know he won his election (I'm guessing this was tossed together in post, but who knows).

So. Let's talk about where this thing really went wrong.

I said before this premise relied on tone, and I stand by that. There's a version of this movie - maybe even this script - I'm convinced could have worked. And the reason I say that is for a few brief moments, this demonstrated how.

When we first meet Nicole, she's weird, quirky, and fun. Patrick is, too: his personality is that of a comedian - he's supposed to be an unusual politician. They make an interesting pair (pity they didn't bother giving Charlotte much of a personality).

If you focus on these scenes and Nicole's dialogue, you can imagine a somewhat defiant dramedy about embracing and celebrating life, even in tragic circumstances (Nicole leaves behind a letter to this effect). That could have been enjoyable and maybe even powerful.

But that isn't remotely the movie they made.

Because what we haven't discussed yet are the montages. Oh, dear God, the montages. I'm not willing to go through this again with a timer, but I honestly think these might account for 50% of the runtime. And they are just awful.

Just long, sad shots, with somber music playing to really drive home the tragedy of it all. An attempt to wring tears from your eyes so blatantly manipulative, it backfires instantly. At first, it's almost funny, but before long, you're just bored out of your mind.

I should also note that music was composed by Dudley Moore himself, and somehow earned him a Golden Globe nomination, which is utterly baffling. To be fair, it's not bad music out of context (quite good, actually), but it completely sinks the tone and the movie.

The movie also stumbles around class. Charlotte is comically wealthy, which means Nicole's life has been as comfortable as possible. It also affords her opportunities to, say, be near a Congressional candidate or practice dance constantly in the private studio in the building her mom owns or travel to New York and get an absurdly late audition (she is literally cast the same day she performs). What bothers me isn't that she's rich, but that the movie tries to pretend that isn't important. Money isn't what brings Patrick into Nicole's life (Charlotte basically tries that, and it almost backfires). They make it clear Nicole is cast because she's really *that* good. Privilege permeates the narrative, but the movie wants you to think it's not important or pivotal when it clearly is.

Let's talk a little about Christmas. Obviously, the Nutcracker stuff serves a plot function. I feel like there's also some sort of parallel between Patrick and the Nutcracker Prince (or maybe Drosselmeyer?) but I can't quite get it to work. Maybe I'm reading too much into that because Dudley Moore's face kind of looks like a nutcracker doll. At any rate, Christmas also serves to contrast the beauty of New York during the holidays with the underlying tragedy of a dying child, because I guess screaming "FEEL SAD" at the screen would have been too subtle.

Is this really a Christmas movie? Eh... kind of? I think the placement of the holidays and significance of The Nutcracker is enough to warrant the title on a technicality, but it's certainly more of a stretch than most of what we review.

More importantly, it's bad. There are a few brief glimpses of something that could have been good, but it's nowhere near enough to salvage this slogging melodrama of a movie.